More from the “Edge”

Brownies need milk. That’s just how it is. You eat a warm brownie, you need cold milk to wash it down. Not coffee, not tea, not soda. Milk. In a glass. Period.

So, I was waiting to make my next batch of brownies until I had milk to drink. We were out of town for a while, so we had no milk in the house. Now we’re here, the fridge is replenished, it’s a good time to make some brownies. My first batch was a little overcooked, so I was determined to keep an eye on this next batch. I wanted something different, so I didn’t want to just re-bake the same recipe. I remember making zebra brownies with my mom when I was younger and you really can’t argue with cheesecake mixed with chocolate brownie, so that settled that. I guess now they’re called marbled brownies or cheesecake brownies – was the old name insulting to zebras and determined to be politically incorrect or something? I used the recipe off the Baker’s Edge website, as I figured they’ve done some research and know what works with their fancy pan.

Chocolate was melted, sugar added, eggs mixed in one by one when the chocolate had cooled. Rattlesnake was dealt with. Flour mixed in, cheesecake part made, batters plopped into the pan in their respective order. Baked, cooled, sliced, enjoyed. Yum.

I have to say, this recipe makes The Best Brownies I’ve ever had. Even without the cheesecake part. When they’re warm, they’re dense and chocolatey (but not too chocolatey), not too sweet, moist but not cloying, and the edge is crispy-chewy as brownie edges should be. The next day, at room temperature, the brownie is still moist and soft and perfect. It’s rare I meet a brownie I still like the morning after. It’s usually a one-night stand, with the rest pushed off to others. These? Well, I’m tempted to keep them, but I kind of don’t want to eat a whole pan of brownies. 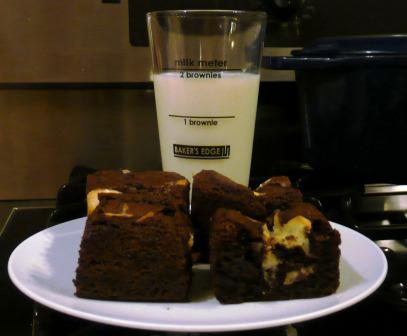 Being all scientific and nerdy, I can also tell you the ideal amounts of milk to drink with your brownies. I started with enough milk for 2 brownies. 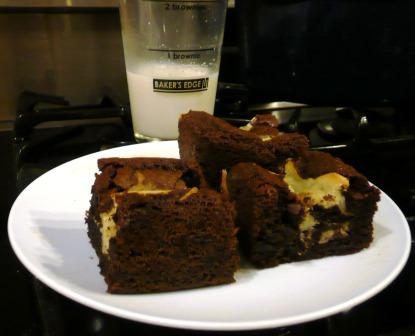 One brownie down, and you can see it took quite a bit of milk to balance out the brownie indulgence. However, the rest of the milk in the glass was just enough to finish off the second brownie. For 2 brownies, that glass of milk was perfect. In case you do not have a graduated milk glass, I also measured the volume for you. A 10 oz. glass of milk will wash down 2 brownies total. However, if you have good willpower and only eat 1 brownie, you will need 6 oz. of milk for that 1 brownie, not 5 oz. If you only pour 5 oz. of milk, you’ll be left wishing you had one more gulp of milk to wash down the last bite. Trust me on this. I’ve done the research. The easiest way to do this is to just pour milk into a pint glass and eat the 2 brownies. Then you don’t have to measure so much.

Seriously, though, you need to make these brownies. They are really good and perfectly balanced. I can’t vouch for them in a regular baking pan, though. You might end up with drier edges or a wetter middle. That wouldn’t be terrible, though, considering the overall flavor of the brownie will still be spectacular. The texture will just be a little different.

Instructions
1. Preheat oven to 350ºF. Lightly spray the Baker’s Edge with non-stick cooking spray.
2. First, make the brownie base. Combine the flour, baking soda and salt in a small bowl.
3. In a medium bowl, sitting over a simmering pot of water (make sure the bottom of the bowl does not touch the water) melt the butter and chocolate, stirring occasionally until melted and then remove from the heat. Stir in the sugar to the chocolate mixture. Stir in one egg at a time followed by the vanilla extract. Stir in the flour mixture.
4. To make the cheesecake filling, combine the cream cheese and butter in a small bowl until smooth and creamy. Stir in the sugar and vanilla extract. Stir in the egg yolks, one at a time. Add the flour and stir to combine.
5. Pour the brownie base into the prepared pan. Pour the cheesecake filling on top of the brownie base. Using a non-stick safe utensil, swirl the cheesecake into the brownie base making sure not to mix the two completely.
6. Bake for 45-50 minutes (40 minutes was perfect in my oven) or until a toothpick inserted into it comes out with moist crumbs. Cool the brownies completely in the pan.

This entry was posted in food, product review, recipes, shopping. Bookmark the permalink.

5 responses to “More from the “Edge””