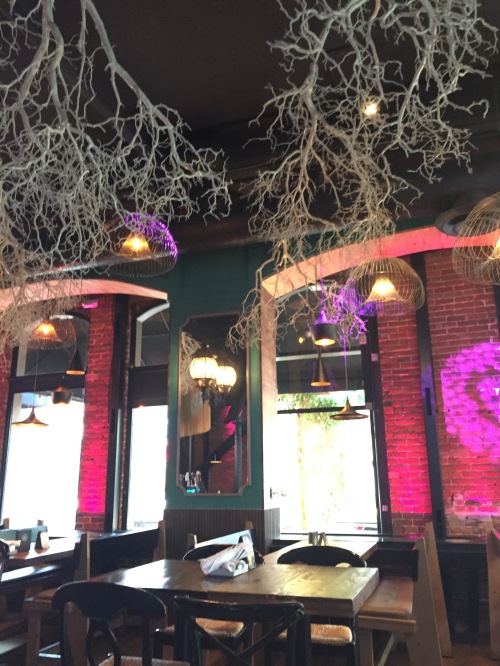 Hey – it’s San Diego Restaurant Week again! SDRW 2016 starts Sunday, September 25 and goes through October 2, 2016, so you get one and a half weekends to travel anywhere in the county to eat a fancy meal for a great deal.

I was invited to preview a meal at Florent, which is a spot downtown in the Gaslamp that I had honestly never ever heard about. But, it looked like a pretty cool spot with an interesting menu, and it was a couple of nights before I was scheduled to get my tonsils out, so I figured a tasty meal out on the town was in order. And, I’m really really glad we went (and really really sad I didn’t get to enjoy the leftovers we brought home).

When you first walk in, all you see are a bunch of high-top tables and tv screens, which makes you wonder about the menu and food quality (or, at least, I did) – spoiler alert, don’t worry about the food because it’s fantastic. On weekends, Florent turns into a nightclub and the high tops allow them to clear out room for a dance floor and give an overall more lounge-y/casual vibe to the place. There are also daily specials… we were there on a Tuesday, which meant half-priced Tiki cocktails and live music (which was surprisingly not too loud! We could enjoy the music and still have normal conversations!) 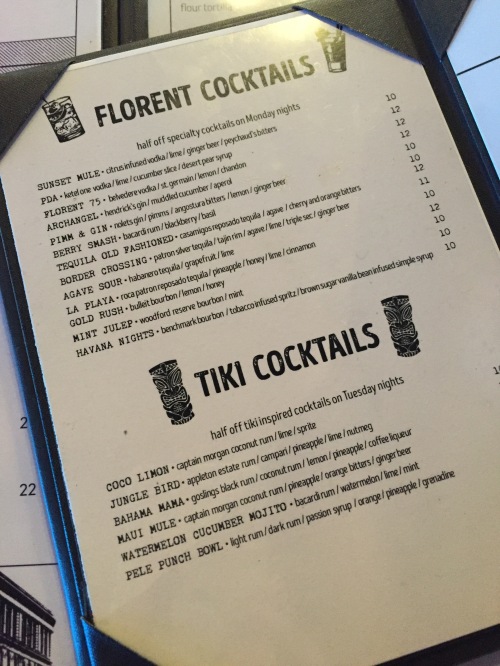 I was really tempted to get a fancy cocktail, but since it was Tiki Tuesday, I felt like I should try a tiki cocktail. I got the Coco Limon, which was very light and refreshing and T got the Bahama Mama, which comes in a fancy parrot mug that seemed to magically never empty of booze. All in all, we were off to a good start. 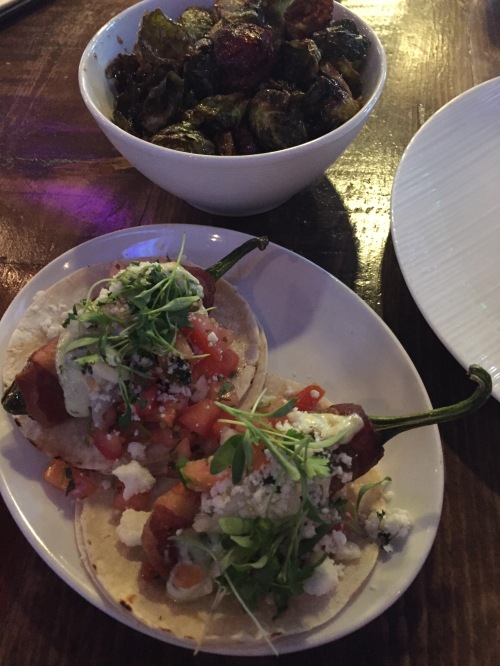 We had been told that two of their best appetizers were the brussels sprouts and the crab cake, so we ordered those. But we were also told about these jalapeno popper tacos – basically a jalapeno popper, stuffed with smoked chicken, turned into a taco. I love jalapeno poppers (the ones wrapped in bacon, not breaded and fried) and I’d never had one stuffed with chicken, so I also wanted to try these. The popper portion lived up to my expectations, and I appreciate the tortillas giving the dish some extra heft. I just ate the popper part, because I knew we would have a lot of food coming, but if I was ordering it another time, two jalapeno popper tacos would be pretty filling. 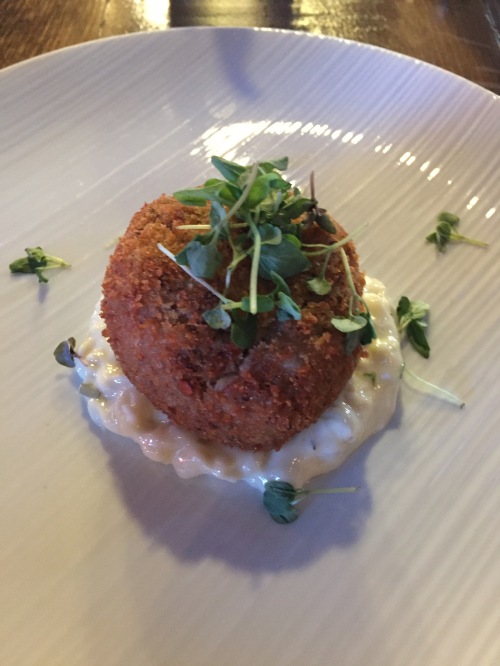 If you go to Florent for Restaurant Week, definitely order the crab cake! It is one of the best crab cakes I’ve eaten in San Diego – full of crab, lightly crispy on the outside, and it’s sitting on this roasted corn tartar sauce that is somewhere between creamed corn and tartar sauce but way less mayo-y than you would expect. (We also got the brussels sprouts that were perfectly crispy and not oversauced… again, I would have finished the bowl if I didn’t know entrees were also coming.) 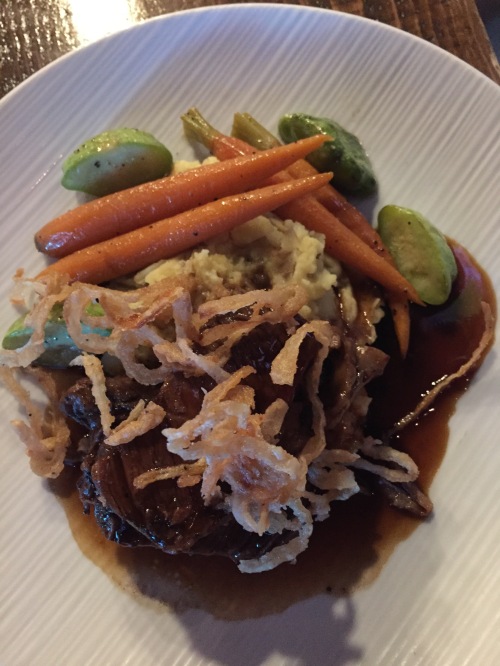 T ordered the stout braised short ribs – sometimes I feel a little over short ribs on menus, but they’ve actually done a terrific job here. Sometimes you get braised short ribs that are still dry and chewy (how does this happen??) but Florent’s short ribs are tender, meaty, and not at all dry. It’s a dish I would have scarfed down, but I was busy hoarding my own plate… 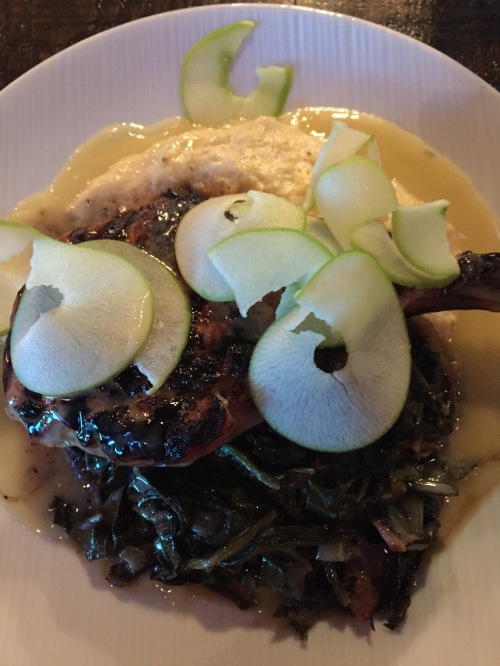 This doesn’t look like much, but it is hands down The Best pork chop I’ve ever eaten in my life. Yeah, it’s sitting on a bed of cheesy grits that I still dream about in this post-recovery daze where even lumpy mashed potatoes are hard to swallow. But the pork chop itself? It’s maple brined and served with vanilla honey butter, and it tastes like it’s been babied and cooked gently so that when you take a bite, you almost don’t have to chew it. It’s that tender and juicy and delicious. At this point, I was already getting full, to the point where I knew in half an hour I’d regret eating any more. I really wanted to finish the pork chop and nibble on the bone, but I restrained myself to save room for dessert. 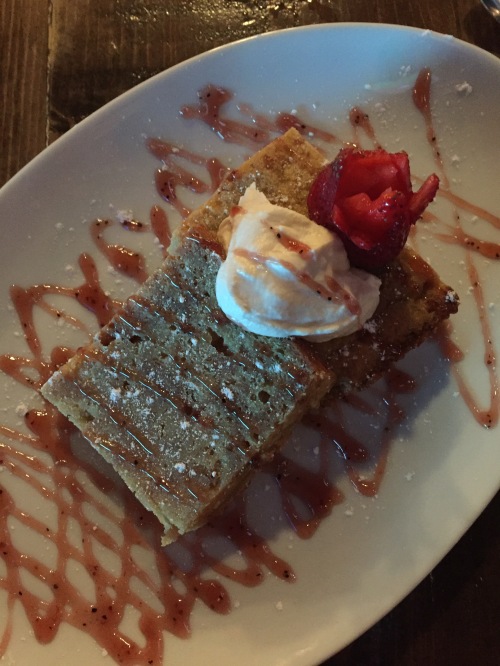 As soon as I saw foie gras bread pudding on the dessert menu, I knew we were definitely going to Florent for dinner. I love foie gras and try to order it any chance I can, in any form. I was really curious to see how this dish would turn out. As a lover of foie gras, I didn’t taste much of it in the bread pudding. As a lover of bread pudding, I would have liked it a little more custardy and soft. As a lover of dessert, this was perfect. Not too sweet, not too savory, not too heavy.

I have to admit, Florent surprised me with the food. I am so glad we went and I can’t wait to go back. Sadly, I won’t be able to eat my way through Restaurant Week this time, but I’m happy to have discovered a new restaurant and added something to my list of places to recommend to visitors downtown.

Disclosure: I was invited to preview the San Diego Restaurant Week menu and our meal was complimentary; however, I was not compensated for this post. As always, all opinions are my own.