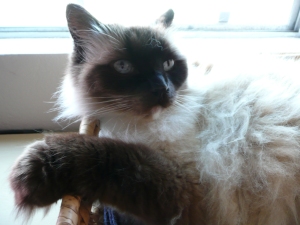 Our Clair passed away November 19, 2009. I wrote a tribute to her, most of which I later realized had already been said here.

Clair is my first pet as an adult.  As soon as I moved out of the dorms and into an apartment, I got a cat.  Growing up with pets all my life, spending a year without them wasn’t fun.  I couldn’t devote the time and energy to a dog, so I got Clair.  When she was a kitten, she was tiny and cream-colored with a chocolate stripe running down her back.  I named her Eclair, but we just call her Clair (hence, there is no “e” at the end of her name).

Clair is coming up on 12 years old and she’s a Chocolate Mitted Ragdoll.  There’s a white patch on her chin (my grandma used to call her Colonel Sanders) and only her front toes are white, so she’s not fully mitted.  This makes her pet quality and not show quality.  Whatever.  She’s still the best cat I’ve ever owned.

They say Ragdolls are the dogs of the cat world.  They’re friendly, come when they’re called, and they like to be around people.  That certainly describes our Clair.  If someone comes up to the front door, she’s the first one there.  She’s either in the same room as we are, or she’s sitting somewhere she can keep an eye on us.  If you call her name, she may not come running, but she’ll at least answer you.

Clair is the best.  She’s never given us any problems, no litter box issues or problems with the dogs.  She’s always polite to company and never too pushy.  She lets you hold her, pet her, and carry her from room to room.  For a while, she was getting kind of skinny, so we started feeding her canned kitten food to bulk her up.  Now that she’s a little plumper, we still give her some canned food in the morning, but only a tiny bit.

If you could tell me that every cat would be like Clair, I would have cats for the rest of my life.