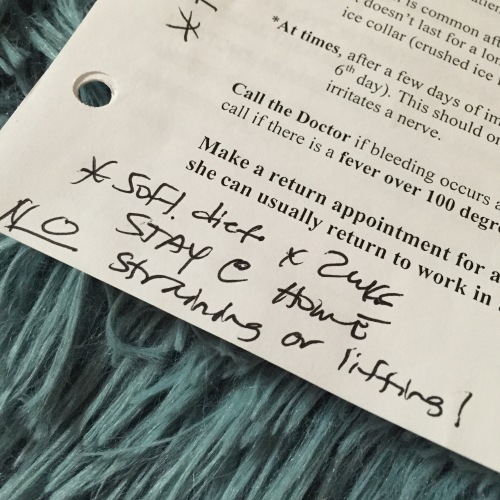 There are a lot of helpful posts on the Internet from people (adults) who have gotten their tonsils out, to give you an idea of what recovery is like and reassure you that you are not, in fact, a giant wuss who can’t handle a little pain. While these posts were useful in giving me a range of what I might or might not expect, the whole “what can you eat/not eat” has been way off. And so, because this is exactly why people have blogs, I’m going to tell you how this whole tonsillectomy recovery thing is going for me.

When I was a kid, I used to get strep throat ALL THE TIME. Like, there was a 50/50 chance that a regular cold was going to end up being strep, with me on the couch being miserable and not able to eat anything because it HURT. At some point, I grew out of it? I just remember getting regular colds and flu like everyone else. And then last winter, I ended up with strep (which I ignored for a week because I thought it was just a cold but it never went away and my throat looked gross so I went to Urgent Care to get swabbed and then… ta da!) and after I recovered I noticed my tonsils never really un-swelled.

Then I started noticing swallowing was harder – like there was something stuck in my throat. Not a huge pain, just a minor annoyance. And I felt like I was always stuffy… which I actually started to blame on allergies. Never mind I have never had allergies in my life. And T said I had started snoring and actually sounded like I stopped breathing when I slept. Stubbornly, I went on like this for a good part of the year before I decided to stop being ridiculous and take advantage of this lovely health insurance that I pay for.

I kind of expected my doctor to tell me everything looked within the normal range of whatever and to get a nasal spray or something. But she referred me to an ENT, and then he actually did tell me that while my tonsils did look enlarged, it shouldn’t affect my sinuses or cause sleep apnea. And then he stuck a scope down my nose (blech) and said, “Oh… huh… yeah, I can see how this could be causing you problems.” So, yay?

Apparently, over the years my lovely tonsils had accumulated scar tissue and gotten so englarged that they were basically getting into a shoving match with other parts of my nose/throat area. And the last round of strep kind of just pushed them over the line to where I was actively annoyed from it all the time. So, the verdict was, they had to come out.

Here’s a fun fact: when your doctor asks if you’re able to take time off work and you say, “Sure, taking a week off shouldn’t be a problem” and then he LAUGHS, you should start researching what kind of torture you’re signing up for. Everyone, from my doctor to the schedulers to the nurses to the Short Term Disability coordinators told me to take, at a minimum, two weeks off work. So, that’s what I planned for. Even though it’s supposedly a 30 minute procedure. Even though I couldn’t imagine why I would need two whole weeks to recover. It all seemed so simple and straightforward. For the most part, it has been, but I would also caution you to at least plan to take two weeks off work because I’m a week into it and I can’t imagine trying to work 8 hours every day.

Once the procedure was scheduled, I started prepping. I thought I was so smart, I’d zip through this recovery and be on my way to eating in no time. I was not going to live off Gatorade and popsicles. I was going to eat nutritious food that would sustain me and be tasty and not make me fat while I was spending two weeks on the couch trying not to drool on myself. HAHAHA. I was so naive!

First, they tell you to not eat or drink red foods – no cherry Jello, no red Gatorade, no strawberry fruit popsicles – because the main concern in recovery is bleeding. You don’t want to bleed, and if you are, you need to get it checked out pronto so someone can stop the bleeding. You also don’t want to freak out because you see red in your mouth but it’s because of something you ate. However, you also don’t want to eat or drink citrusy things because it will sting. Do you know how hard it is to find food and drinks that are not red and also not citrus???

Basically, my plan was to drink tons of coconut water (to stay hydrated, for electrolytes, and also for calories) – I bought Gatorade but I haven’t even opened one… they kind of scare me. I was going to live off green smoothies made with almond milk or coconut water (to stay away from mucous-y dairy effects) supplemented with protein powder for nutrition! Then I was going to transition to blended chicken noodle soup! After that, I think I figured I’d be good for whatever, as long as I chewed it completely. HAHAHA. The only part of this that has gone according to plan has been the coconut water, only because it is way tastier than just water.

This entry was posted in about and tagged food blogger recovery, tonsillectomy, tonsils. Bookmark the permalink.