We don’t really do a lot of Public Service Announcements here on 3DK, but every now and then something Very Important pops up and I feel an intense need to share it with the world. That need, after all, is why the blog was invented, right?

Are you aware that there is a difference between East Coast butter and West Coast butter? I wasn’t really, until we started looking for a butter dish. Something to store half a stick of butter in the fridge, a dish to leave on the counter on Sunday mornings for softened butter without making a greasy mess. My knowledge of butter consisted of salted vs. unsalted and quarters vs. full pound blocks (thanks, Costco!)

And then we bought a butter dish.

It was a clear glass butter dish. No ceramic cows for our household, and my suggestion of a butter bell was met with skepticism. Plastic seemed too shabby, so we went with the $4 glass covered dish from BB&B. Everything seemed fine until we left a stick of softened butter on the dish, covered it, and placed it in the fridge. The butter solidified and stuck to the top of the cover. All of a sudden, we had to use the butter dish upside down (take the bottom off, turn the cover upside down, scoop out butter). 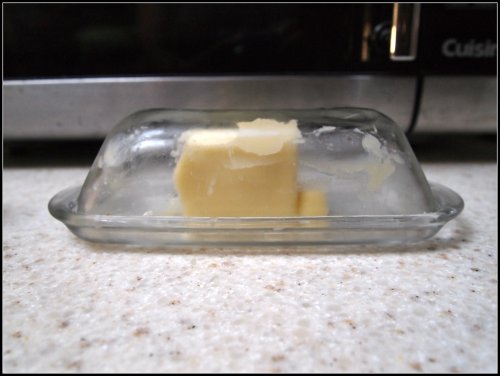 I tried looking for a larger butter dish (thinking we had just bought some dumb, cheap version that didn’t fit). I found a really cute plastic/rubber one at Home Goods, with markings on the outside to measure off tablespoons and a sliding pusher that would push butter out the end so you could neatly slice off pats. But it was too skinny. Our fat butter sticks were squatty and too high. I would have had to remold the butter stick to make it work.

And then, Travis did some internet research and discovered the truth: butter sticks east of the Rocky Mountains are longer and skinnier than butter sticks west of the Rockies. Most butter dishes are designed for east-of-the-Rockies butter sticks (which makes no sense – what about us West coasters??) Also of note, a butter stick is almost 9 tablespoons by volume, even though the markings on the wrapper show 8 tablespoons.

Anyway, the point of this crazy rambling post is this: we have located a butter dish (albeit, a plastic one) that is designed to hold west-of-the-Rockies butter sticks. We found it at BB&B and I could swear it was not there when we first started our butter dish hunt. We’ve been using it for a few weeks now, and our butter does not stick to the cover at all. My only gripe is that the bottom part has a ridge around the edge and I’m worried that over time I’ll just slice it off with a knife trying to get to the butter.

Perhaps we’re the only ones with such nitpicky requests of the butter dish. At the very least, I’ve clued you in to the conspiracy that the butter industry is pushing an extra tablespoon of butter into your diet without you knowing!

This entry was posted in food, product review and tagged butter, butter dish. Bookmark the permalink.