It often seems like, in this day and age (does make me sound old?), people don’t like going to chain restaurants or at least admitting that they enjoy them. Admittedly, I have quite a few chain restaurants on my list that I avoid and if you tell me you love going there, I literally have to bite my tongue so I don’t call you crazy. However, there are also some chain restaurants (or eateries) that I love: 3 warm cookies for $1 from McDonald’s on a late night can’t be beat; 2 deep-fried tacos for 99 cents at Jack in the Box is an awful, awful (but rare) indulgence of mine; if you even try to berate my In-n-Out I will cut you. I am now adding to this list: Smashburger burgers.

Now, until recently, I’d never actually had a burger at Smashburger. I’d tasted their chicken sandwiches (fried) and salads and Smashsides (not a fan of the veggie frites), but not a burger. But, thanks to Dara and the fine folks at Elle Communications, I finally got to try one at their VIP Preview Party for the Rancho Penasquitos location!

As usual, I asked Travis if he wanted to be my guest and, as usual, he agreed. I’d say that blogging takes a lot of my time away from him and that a free meal now and then is his reward, but his brewing hobby takes up way more time and all I really get is having my car banished from the garage. Well, among other things.

Anyway, we had our reservation time for 7:15 pm, which was easy to make since the RPQ location is so close to our house (love it!) We got there, had our name checked off the list (how fun is it to be on The List?), and stood in line to order, which didn’t take much time at all. Travis actually pointed out that Mary was ordering in front of us; I was too busy trying to decide what burger I wanted and which side to get with it. After seeing what Mary ordered, I felt like such an amateur! Must remember to order more things to try next time.

I kind of wanted the San Diego burger, but I wasn’t sure if I’d like the torta roll (and didn’t really want to ask for a substitution on their pre-opening day). I would have gotten the BBQ Bacon Cheeseburger, but Travis wanted that and I really don’t like ordering the same thing when we’re out. So, I got a Mushroom Swiss Burger and a side of chili fries. Travis got a side of sweet potato fries.

We found a table next to Mary (not that we were stalking her, it was just the first open table we saw!) and settled in. Then CAB came by on her way out, and she had PIE with her (she made it, Smashburger does not have pie). Then Kirbie and her FH came through! It was like a mini food blogger reunion! (Marie and her hubby were there, too, and sat at our table, but it was when we were finishing up our burgers. And hot dog.)

While we waited for our food, servers were coming around handing out little samples of their shakes, which are made with Haagen Dazs ice cream. We tried a chocolate shake and a Butterfinger shake and I preferred the chocolate one. I also really like the sample sizes – just perfect for a little taste! I’d really like to try a full-size shake to see what the consistency is. The samples were not very thick, so they were easy to suck up through the straw, but not very milkshake-y. But they did taste delicious. 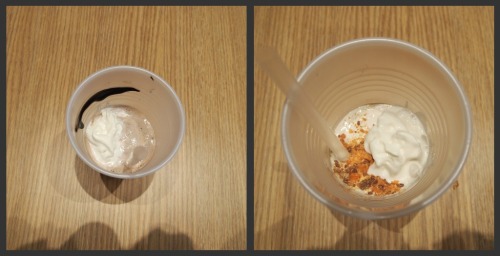 Our burgers arrived and the first thing we noticed was how hot the burger was! Like, you needed to let it cool a little or you might burn your mouth. I’ve heard that’s the case at other not-brand-new locations, too, which is promising.

I really love a good BBQ Bacon burger, so after I took a bite of Travis’, with some crispy onion strings on top, I was sad I didn’t get one. But the Mushroom Swiss burger was good, too. The regular burger is a 1/3-lb patty; a BigSmash burger is just under ½ lb of meat. It’s not free-range or grass-fed, but it tastes like beef and makes a darn good burger. The potato bun is soft enough to squish, but not so soft that it disintegrates when the burger juices soak in.

I was also really enjoying the chili fries and it made me think that they probably make a really good chili dog. So, when Travis got up to ask for a side of bbq sauce, I asked him to also go order a hot dog. I originally wanted a chili dog, but we’d already tasted the chili and were more curious about the hot dog part, so he ordered a Chicago Dog. He asked the girl at the register if it was okay to order more food and she said “everyone” was doing it, so he didn’t feel too bad. One of the many reasons (oh so many) I love my husband is because he will often ask questions and make phone calls on my behalf. I don’t like talking to people!

Incidentally, our extra-food ordering may have also emboldened Marie’s husband, because he also ordered a hot dog after they got their food. 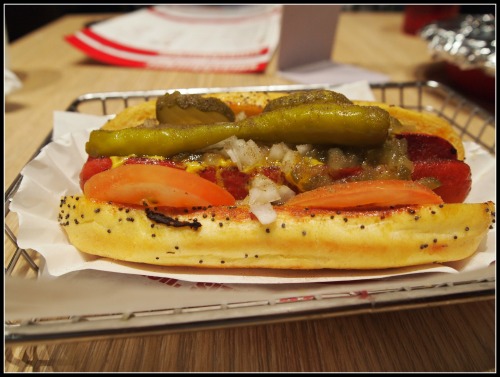 The hot dog was split down the middle and nicely seared, served with a pickle, tomatoes, and a hot pepper. And plenty of celery salt (a little too much celery salt, I thought). It was a good hot dog, and I still think their chili dog would be fantastically satisfying, but it wasn’t the best Chicago dog I’ve had in San Diego.

We also ate the pie that CAB so generously gifted me and then I was absolutely and truly full. I wanted another shake sample, but I also knew there was just no room for one.

I’m really happy Smashburger has opened up in Rancho Penasquitos. Travis likes it better than In-n-Out, mainly because there are more topping options for your burger. And fries. They also serve beer, which is a plus. We’re trying to eat in a little more, so we probably won’t be there all the time, but it’s going to be a frequent stop when the burger & fries craving hits.

Both CAB and Mary already wrote about their visits…

This entry was posted in food, restaurants and tagged burger, rancho penasquitos, Smashburger. Bookmark the permalink.