One Year Down, many more to go 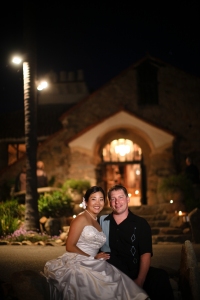 One year ago today, I married the best husband a girl could ask for.  He is patient and kind, silly and sweet, thoughtful and genuine. He builds me chicken coops and garden beds. Washes the dishes after I make a mess of the kitchen. Takes me on great adventures and spends weekends at home watching silly movies with me.  I don’t have enough words to tell you what a lucky girl I am, how blessed my life is, how amazed I am to get to share this life with such a loving man.

END_OF_DOCUMENT_TOKEN_TO_BE_REPLACED

As I mentioned, all Mount Woodson Castle events are catered by Personal Touch Dining.  One of our original thoughts when planning our wedding was to choose a venue that would allow us to bring in any caterer we wanted (we wanted Cavaillon to cater it, since we love their food and Luc’s Bistro AND they were super affordable), but this proved to be nearly impossible.  I wasn’t willing to compromise  enough on venue location and overall “feel” just to be able to bring in my own catering.  I didn’t want to have to decorate a community center rec room and I certainly wasn’t going to get married in Marina Village where it smelled like, well, a marina when you walked outside.

Please note: I completely admit to being a snob about my venue “wants” and if we had serious budget limitations for choosing a venue, I probably would have been more open. We attended a nice party in Marina Village before our wedding and, while it did smell vaguely of fish outside, the room was well-decorated and we had a lot of fun.  But I’m glad we didn’t get married there.  If YOU got married there, I’m sure it was lovely and that you also had more patience and creativity than I do about decorating a space.  We are not decorators.  We’re two engineers living together.  My improvement on Travis’ “design” of our backyard was to throw in curves and round patio areas because he had drawn everything with straight angles.  That was about all the creative input we really have.

END_OF_DOCUMENT_TOKEN_TO_BE_REPLACED

One of the first things we did after we came back from New Zealand (which I STILL haven’t posted about, how terrible am I?) was start looking at venues.  Okay, one of the first things we did was pick a date, but 1) we technically did this on the plane ride home, 2) we later changed the date, and 3) date-picking doesn’t make for a good post.  So, we had originally picked an October 2011 date back in September 2010, giving us a little more than a year to plan a wedding.  I knew nothing of wedding planning, really, but I knew we had to get on the ball figuring out where we wanted to get married because if we wanted a popular spot it could get booked up really quickly.

Do you know how many places you can get married in San Diego?  There are, like, thousands of spots and that’s not even counting churches (and other religious institutions).  We knew we wouldn’t be getting married in a church and we knew we wanted a location where we could have the ceremony and reception. We pretty quickly ruled out a beach wedding and locations along the coast.  I know – San Diego is an ideal beach wedding city.  But, we’re just not beach people, so it wouldn’t have felt very “us”.  After I’d looked into hotels, downtown, Balboa Park, the Wild Animal Park, and wineries in Temecula, we decided to focus our search to North County Inland – mainly, close to our home in Poway.

Our initial list consisted of Rancho Bernardo Inn and Maderas Golf Club.  It wasn’t until later than I even found out about Mount Woodson Castle, and what I did find (on Bridal Insider) was not promising (cancelled contracts, lost deposits, last-minute wedding venue scrambles, etc).  But, Travis heard we could get married in a “castle” and was all over it – at the very least we had to schedule a site visit to go look.

To sum up: Rancho Bernardo Inn was actually our top contender and we got close to putting down a deposit, until we really looked at their quote.  It was just so much money!  Beautiful space, but expensive, especially when we were looking at just 75 people (and that was mainly to meet their room minimum!)  Maderas Golf Club had a slightly lower room minimum, but it was still a lot of money.  Plus, due to some scheduling snafu (on their end) our preferred wedding date had already been booked.  We went back to Mount Woodson, asked them some critical questions, braved a bridal fair to get our “coupon”, moved our wedding up 6 months, and then booked the site.

Mount Woodson was not my first choice, but it turned out to be perfect.  I’ll tell you about the catering later; Personal Touch Dining does all the catering for Mount Woodson events, since Tracy is also the property manager.

The photo at the top of the post is one of the main reasons I ended up loving the site.  Once we made the decision to hold the ceremony inside, I was looking forward to photos with the light framed by the windows and doors. 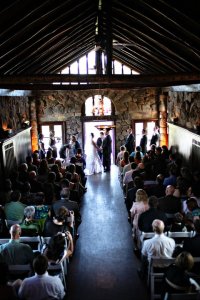 Our ceremony was inside (much cooler, too) and the bar was set up on this little patio right outside.  Dinner tables were set up on the lawn in front of the castle and we had patio heaters all over the place to keep people warm, but I don’t think we even needed them that night.  There’s a refurbished kids room with tables and books and toys, which I also don’t think we used (we only had 3 kids at our wedding).  We had the photobooth set up in one room and the mini donuts were stationed outside where the dinner buffet had been.  The dj was set up on this little balcony over the dance floor (which was where the ceremony was held).

Just around the corner from the castle was all this greenery – it made for beautiful pictures. 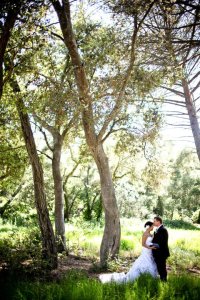 We never had any problems dealing with Mount Woodson, Tracy, or anything else having to do with the venue.

The wood and stone were just rustic enough to give us the casual feel we were looking for, but the space lit up beautifully with all the candles our coordinator spread around.  We extended our reception an extra 2 hours and I still think I could have stayed there all night.

With the new management and all the renovations being done to the castle, I think Mount Woodson is an amazing wedding location.  It’s definitely off the beaten path from San Diego proper, but it’s not as far as Temecula.  The closest hotel is off Scripps Poway Parkway, by SR-67, but there are also hotel/motels in Poway.  I think I would also recommend having a shuttle or bus system set up for evening weddings, since the 67 can get a little tricky to drive in the dark and you want people to be safe! 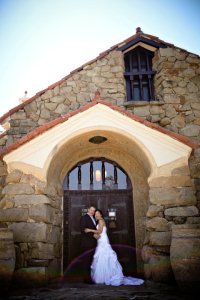 Our wedding was just over a month ago; our Hawaii dinner “reception” was last weekend. Do you think I’ll ever stop saying, “Where did all the time go?”

People have been asking us how it feels to be married, to be living the part of life that comes after planning a wedding. Honestly, it still doesn’t feel all that different. Travis still takes the trash out on Sunday nights, does his own laundry three loads at a time, and washes the dishes after dinner as I sprawl across the couch watching silly tv shows. I still call him up to see what he feels like for dinner, go grocery shopping, and clean the cats’ litter box. We still haven’t really managed to find time to sit still or vacuum or deal with the pile of cards on the table. Sometimes he calls me “wife”; sometimes I call him “husband”. I am still signing my maiden name for credit card purchases. I answer to my new married name, but I’ve yet to refer to myself as such outside of work.

Travis says if we did it right, nothing should really feel all that different.

Maybe it’s because we’d already combined our finances into a joint account, so we’re in the pattern of who balances the checkbook and transfers money into savings. Maybe it’s because we still have separate accounts, so I don’t have to answer questions about the shoes I buy and he can order whatever homebrewing equipement he wants. Maybe it’s simply because we’re older and we knew what we wanted before we ever got here.

I’ve also been asked if it’s a relief not to be planning a wedding.  Honestly, the hardest part of planning the wedding was writing out these huge checks; I’m glad we don’t have to do that anymore!  Also, our wedding-related tasks aren’t really over yet.  We have thank you cards to send out (do we send out generic ones or get some printed with photos?), decoration boxes to unpack (do we use the big green vases, donate them, or try to put them up on a wedding site for sale?), and a “registry completion” event to go to (Travis is really sick of our drippy coffee pot).

Funny story: The other night I made salsa and pulled out the food processor bowl that came with my old blender.  It’s larger than a mini chopper (which I love) but way smaller than a stand-alone food processor.  Travis asked why we don’t have a bigger food processor and I joked that it’s because no one bought it off our registry (I was joking! I am in no way ungrateful for the many generous gifts we DID receive!)  I’m guessing the coffee maker and food processor are two items we might be looking to grab for 20% off.

Related side note: From our registry, someone did get us the hand mixer and microloft sheets, items I half-heartedly put on the registry to begin with. The former because I hadn’t felt I needed a new hand mixer after my old one broke, the latter to appease Travis’ love of soft, flannel-y sheets.  Well, I now love the mixer because it turns out there are quite a few things I make that are too stiff for hand whisking but not large enough to warrant pulling out the KitchenAid.  And the sheets? Let me just say it’s like being enveloped by the softest blanket ever, from head to toe, but they’re sheets, so they aren’t stiff and heavy.  Love them.  At some point, it’ll get too warm and we’ll have to switch to summer sheets, but as long as the nights are cool we’re keeping them on the bed.

I think I lost my point. Where was I?  Oh yeah, the wedding’s over, but we still have a lot of things to do before we return to what I call “normal life”.  And that doesn’t even include the ancillary tasks involved with getting my name changed.

So, I’ve set some goals for myself:

The cat picture I just threw up there because it’s cute.  It’s cute the way the cats have completely made themselves at home when, at one point, we thought we’d always have to protect them from becoming a Sadie-chewtoy.