We’ve been going through a lot of greens lately – for smoothies, juices, sautees, etc.  So, when Jen from BAM Communications mentioned organicgirl salad products, I was intrigued.  A little while later, a box arrived on our porch with romaine hearts, baby spring mix, and supergreens.

Each container has a plastic hard cover, but it’s also sealed with plastic on top.  Until you unseal it, the greens stay fresh (and pre-washed!) for quite a while, but the plastic top means that if you don’t use it all, you can easily keep it stored in the fridge.

END_OF_DOCUMENT_TOKEN_TO_BE_REPLACED 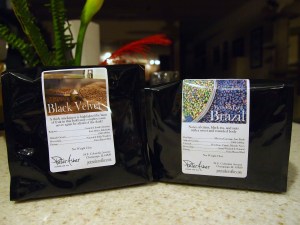 Disclosure: I was provided two 12-oz packages of coffee by Peter Asher for free but was not compensated for this review. As always, all opinions are my own.

A while ago, I was contacted by John Herriott of Peter Asher Coffee and Tea.  Peter Asher is located in Champaign, IL but they are looking to expand their reach west.  They are a family owned business that maintains direct relationships with their coffee bean growers.

John sent me samples of two of their coffees: Black Velvet and Brazil Bob-O-Link.  I requested the coffees be sent ground, since Travis likes the convenience of pre-ground coffee instead of grinding beans every morning.

END_OF_DOCUMENT_TOKEN_TO_BE_REPLACED

As part of the Foodbuzz Tastemaker’s program (which I love, by the way), I received two loaves of Nature’s Pride bread to try out: 12-grain and Whole Wheat. The Whole Wheat loaf went into the freezer (two people can only eat so much bread at a time, you know) and the 12-grain loaf went into the fridge. I think I’ve gotten into the habit of storing bread in the fridge because for a while I was buying bread from Trader Joe’s, which doesn’t contain preservatives, and if you don’t refrigerate that stuff you will find it moldy in just a few days.

By no means do I consider myself a bread snob. Yes, homemade is better warm out of the oven, but for a simply piece of toast or a turkey sandwich, just about any wheat bread will do. If I was daring and threw caution to the wind, I would splurge on potato bread or some other white bread with no nutritional content, especially since it’s softer and crisps up nicely in the toaster. Alas, I do what I can to maintain a “healthy” appearance in the kitchen.

The first day, I made peanut butter toast with the 12-grain. Do you want to know how it turned out? Lovely! The texture was crisp on the toasted outside and soft in the middle and there was a nice nuttiness to all the grains and seeds in the bread. The bread also makes a great grilled cheese or ungrilled turkey/turkey bacon club. It’s good bread! It’s tasty bread! And even two weeks later (in the fridge, wrapped up), the bread is soft and enjoyable and continues to act as a strong base for peanut butter toast. I’m looking forward to testing the Whole Wheat bread in a French toast dish. That’s when you know you’ve got a good hearty bread – when it turns out a soft custardy French toast and not a hearty wheat bread covered in sweetened egg.

I haven’t priced it yet, but I’m guessing it’s going to be comparable to Orowheat or Milton’s.

By the way, when my mom was staying with us, she also ate some of the bread and loved it so much she looked for it all over once she got back home. I didn’t realize this until I talked to her later about it and she told me she was going to have to come down to San Diego just buy the 12-grain bread (she found the Whole Wheat, just not the 12-grain). I had to tell her that I wasn’t even sure what stores here carried the 12-grain, since I didn’t purchase them from the store!