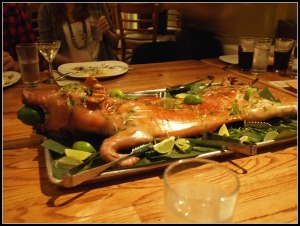 Way back in 2011 (December), we celebrated our friend Jeff’s birthday at Alchemy. Not just for tasty bites, but for their whole suckling pig dinner.  I heartily endorse this method of celebrating birthdays, since it involves a good group of friends and some really delicious food.  I’m a fan of good food, in case you haven’t noticed.  And since you need 8-10 people to really do this pig dinner right, a birthday seems like the perfect excuse to gather everyone up, which is exactly what his lovely wife Cami did.

END_OF_DOCUMENT_TOKEN_TO_BE_REPLACED

I used to have quippy titles

Back when we thought everyone was going to be in town (Travis included) for some birthday dinnering, Travis made reservations at Alchemy for me. The girls had been there before (girls + baby, I guess) and I had their vegetarian tasting menu (which was very filling and delicious) and we thought this would be a good time for Travis to finally get down there. I’m sure the fact that it’s next to Hamilton’s had nothing to do with the suggestion. So, plans were made, then people were being sent out of town, plans were tweaked a little and in the end I had a second birthday dinner with ¾ of our friends, minus one Travis.

I feel compelled to tell you about our dinner because 1) it was really good and 2) Alchemy is getting negative press by the regulars on that site. The All Important Collective Voice of That Site says that service at Alchemy is terrible and they are always rushing their diners and bringing new food out before you’ve finished the food in front of you. So, potential new customers who were looking for advice have now decided that Alchemy is no place for them and they will not go try it. Which is a shame. Now, you could say that as a happy customer it’s practically my duty to put my two cents in and say that I’ve always had great service (although, I’ve only been there twice) and never felt rushed. I could do that, except I’m not fond of public flogging or creating undue stress for myself, so I’m not posting anything. If I did enjoy public flogging, I would also post that I very much enjoy meals at Thee Bungalow, a restaurant owned by that wretched Cohn Group that is somehow ruining the food scene in San Diego? I just don’t get the attitude on That Site.

So. My birthday dinner? Delicious. I had printed out an e-mail from being on the mailing list that got us the tapas of the day, which was essentially fried cheese. Kind of like taking halloumi cheese, deep frying it, and serving it with a tiny pile of dressed greens (which did a good job of cutting the richness of the cheese). We also had a bowl of the parmesan frites, which were hot, crisp, and cheesy. Like the best garlic fries but without the garlic (or garlic breath). The boys had the burger (which must have been good because it was polished in no time), Abbey had the flat iron steak, and I went for the braised pork shank (my other choice was going to be the seasonal pan braised wahoo). Think of a good osso bucco, then replace the veal with pork and make it smaller. My pork was tender, not dry at all, and it tasted like a really good pig. There was a tiny bit of marrow in the bone, which I shamelessly dug out with my knife, and it was served with braised kale and a mini cast iron dish of sweet potato puree. Yum. I don’t really like braised kale (I prefer it in soups or oven-baked into crisps) but that’s only because it tastes rough and healthy. I mean, it tastes good, it just tastes healthy. I ate everything on my plate, though. I could probably have eaten another dish of those sweet potatoes.

You can’t have a birthday dinner without dessert, and mine was the chocolate trio: a chocolate-chipotle crème brulee (subtly spicy and creamy), a chocolate-peanut butter truffle (a bit too rich, actually), and a chocolate crunch thing topped with salted caramel (crisp and crunchy, buttery, and delicious). The chocolate crunch part was my favorite.

We ordered the tapas, then the parmesan frites, and then ordered our entrees when the drinks arrived. I don’t remember feeling like I had to wolf down what was on my plate because the next plate of food was arriving. Our water was filled regularly and our server came by often to check on us. Granted, it wasn’t very busy that night, but I didn’t feel ignored or rushed.

I also want to point out that both times I’ve been to Alchemy, it was with a baby. Now, he’s almost one so he can sit in a real high chair (although, the high chair seemed too low for the table), but the first time I don’t think he was able to sit up, so he stayed in his carrier. My point is, the people at Alchemy have always been super baby-friendly. They helped figure out the best way to stick the carrier in an upside-down high chair, they don’t mind the mess or the fussing (I don’t think he really fusses loudly, anyway), and the other night they picked up whatever toy was thrown on the floor with a smile. I’ve never had anything but friendly and good service at Alchemy. And I like the food.

Maybe it’s a blessing in disguise that Travis got sent to Tucson. Now we’ll have to go back so he can try the food!