Today is Earth Day! At work, we’ve been “celebrating” it all week, getting e-mails on earthy things to do and how to “green” our lives to better the planet. It seems like every year “going green” is pushed more and more, or being touted as the new thing to do. But I feel like we’ve been trying to conserve resources and live sustainably for a long time (is it just me?) So, in honor of Earth Day, I thought I’d list out some things we’ve tried to incorporate into our lives in an attempt to live green, live sustainably, or just live better.

Things we don’t do, for various reasons:

Have you made any changes to live “green”? Are there things you’d like to try but haven’t yet?

Also, congrats to Carol (CAB Cooks) who won the movie giveaway!  I hope you find the movie is worthy of some rainy-day popcorn munching.  If not, then I hope the soundtrack at least provides some good tunes!

I’m a sucker for promises of guiltless, fast desserts When I saw the box of Trader Joe’s Reduced Guilt Fat Free Brownies, I wasn’t in the least bit interested until I saw they had directions for making one brownie. Two tablespoons of mix and one tablespoon of yogurt and you’re off! I’m also wary of microwaved baked goods, but I stuck my little dish in for 45 seconds and was rewarded with some chocolatey and vaguely satisfying.

It’s more cakey than brownie-like, but it’s not chewy like some microwaved breads can get. I wouldn’t recommend using Greek yogurt, like I did, since you’ll have to add milk to make up for the consistency and then you’ll have too much batter to cook in 45 seconds. I’m wondering if you could just use milk, since we always have that on hand, which means this really could be a last-minute dessert fix.

For me. I would never serve microwaved fat-free brownies to people, but to whip one up for just me, I think TJ did a decent job. 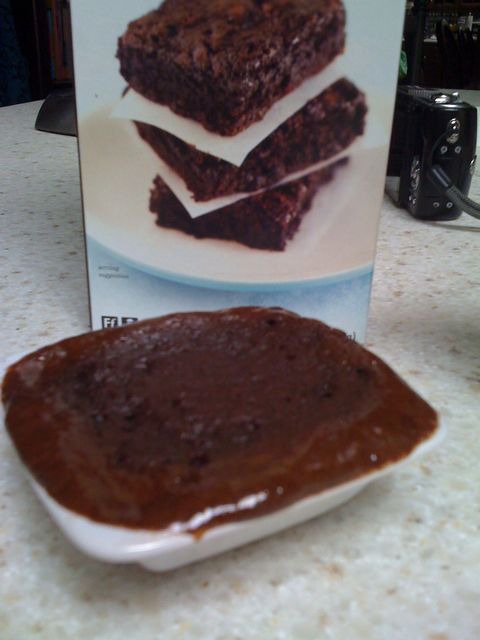 this is not a potato

Popovers are not hard to make.  You whip up a batter, let it sit, pour it into hot tins, and then bake until poofy.  But, like everything, sometimes you just want something now.  Right Now.  Considering that I have a whole category of posts dedicated to things I’ve found at Trader Joe’s, you may not be surprised that when I saw a box of frozen popovers in the store I didn’t hesitate to throw them into my cart.  Actually, the purpose was to have an easy breakfast before we got started cooking and cleaning for our dinner party last month.

They come in a box of 4, each individually wrapped in plastic.  Not environmentally sound, though, considering you’ll probably go through all 4 popovers fairly quickly.  They are already baked (and puffed up), so all you have to do it heat them up in a toaster oven – 5 minutes.  So easy!  They’re a little crispier than when I make popover, but they’re buttery and good all the same.

For breakfast, I made soft boiled eggs and them plopped the eggs into the middle of the popover.  Then, for lunch, I took some crab salad, split the popover, and we had a lovely light lunch that took 2 minutes of my time.

Trader Joe’s has made me buy some pretty tasty things: panna cotta, popovers, canneles, creme brûlée, and chocolate covered Jo-Joes, among other things. But now they have macarons. Not macaroons, the chewy coconut cookies. Macarons, the fancy French cookie made of almonds and egg whites and usually filled with something good. Found in the freezer section, you get 12 for $5. That’s a better price than I’ve ever paid for one of these suckers.

Are they as good as the best I’ve found in SF or NY? No, but they’re certainly not the worst I’ve ever had. For $5, I think it would satisfy any cravings of mine.

By no means do I consider myself a vegetarian.  I’ll dig into a good ribeye or pork roast without hesitation.  Granted, I have been looking into meatless meals and things out of consideration for our health, but I could never give it up completely.  For one, bacon is only bacon in its pure, fatty, porky form.  For another, most meat substitutes don’t really satisfy a meat craving (which leads me to wonder, if you’re a vegetarian, why are you craving meat?)  But, there are certain things that are so removed from meat form that I think meatless substitutes might work.  Soy chorizo is one.  Apparently, these corn dogs are another.

You have to admit, the biggest reason you’re eating a corn dog is for the corn-bready batter.  But they’re so bad for you, you really can’t justify indulging in them very often.  I haven’t eaten vegetarian hot dogs, so I don’t know what they’re like, but I can tell you that if you dip it in batter and fry it up, you can’t tell the difference.  I’ve heard Morningstar Farms makes a good meatless corn dog; I’ve also heard rumors that the Trader Joe’s version is actually the same as Morningstar Farms.  Whatever.  If you bake them so they’re crispy and swirl it through ketchup and mustard, it makes a decent snack.  Two and a glass of milk could even be considered dinner, if you’re lazy (which I often am if I don’t have to cook dinner for anyone else).

Just make sure the sticks are securely buried in the trash can so curious dogs can’t pull them and nibble on the extra-crunchy batter part that sticks to it.