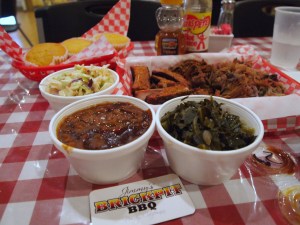 Travis is always looking for a good bbq dinner.  Pulled pork is usually his yardstick measure; mine is brisket since I’ve given up on finding tri-tip like I’m used to from years in San Luis Obispo.  A place gets bonus points if we don’t have to travel too far from home to get some tasty smoked meats.

We’ve been to Kaminski’s enough times to not really want to go back.  We also went to Smokin’ Joe before it changed names and became Jimmy’s Brick Pit BBQ.  I thought Jimmy’s was the same, just with a different sign, so one night we decided to stop in and see for ourselves.  It’s the same, just with a little more bad-partner drama, and sometimes red velvet cake for dessert. END_OF_DOCUMENT_TOKEN_TO_BE_REPLACED

First, I have not given up on that other blog I started, but it is going to be a while before I get caught up there.

Second, I think this will make up for the fact that I haven’t posted a picture here for, like, a billion posts.

Third, I consider these more pre-wedding pictures than engagement pictures because, let’s face it, we’re already halfway through our “engagement period”.  The teaser pics came out pretty nicely, I think, and I can’t wait to see the rest of them.

Mandi Contreras is our photographer, and she’s an associate photographer with Melissa McClure Photgraphy.  We got tons of amazing recommendations on photographers, but we couldn’t afford a lot of them.  Plus, the moment we sat down with Mandi, I loved her.  She came out to our house after Christmas and we took pictures in our neighborhood and then jaunted over the Old Poway Park.  She even got some photos of our pups (nicely groomed just before that last storm hit.. great timing!) 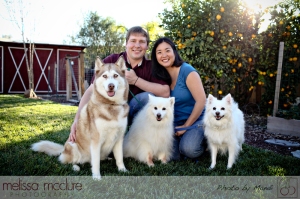 That last one is my favorite… it’s our family!  Minus the cats.  Look how cute the pups are!

Thanks, Mandi!  We had a blast posing and temple-nuzzling, and smiling big smiles all afternoon!

Posted in about, dogs, poway, wedding 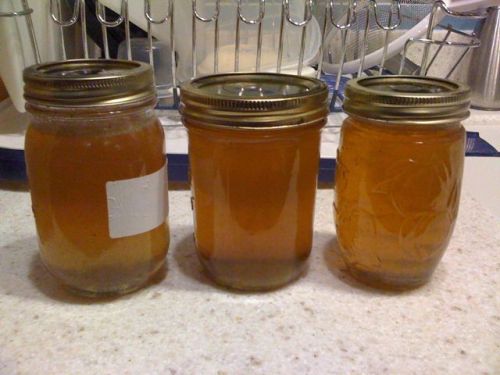 Thanksgiving is almost here.  Do you know what that means?  It means we hosted our Pre-Thanksgiving Dinner last weekend.  I started throwing a dinner party because, well, because I love throwing dinner parties.  But once Thanksgiving gets here, everyone’s schedules get all crazy and it’s hard to pin down a date that works.  So, I started having my dinner party before it got too busy.  Since T joined in the hosting, he’s added his own special Festivus flair.  My favorite part is the Airing of Grievances; I save them up all year just for this one event.

I try to stay away from typical holiday dishes for dinner.  We’re all going to have plenty of turkey and stuffing, so I like to do something different.  This year I did a whole prime rib.  In some ways, it’s really easy.  In others, it’s still tricky to get the roast cooked to everyone’s tastes.  I had a huge 13-pound roast from Costco, but I had to cut it in half to make it fit on my baking tray.  I ended up cooking them for 3 hours – the smaller roast was definitely more well-done but the larger one was pretty rare in the middle.  It’s a tricky balance, I tell ya!

Our lovely friends brought a homemade cheeseball, I threw out some puff pastry cheesy things from Costco, and pan-fried mini crab cakes (the crab came from Costco, but I made them myself).  We had roasted brussel sprouts and carrots (that ended up steamed because I had to reheat them), baked potatoes, popovers, and creamed onions.  I also made a German Chocolate Cake and some poached pears.  I’m totally looking forward to eating the leftovers.

As the years go by, and with every party we throw, T and I seem to get the routine down faster and faster.  This year, I had enough time in between cooking to dust and vacuum the house, which left T with enough time to mow the lawn.  With the exception of baking the cake during breakfast, I think I started cooking around 2pm, for a 5-6pm dinner time.  Not bad!  Granted, we also didn’t spend as much time on appetizers this year, and we really didn’t get around to planning some fun party games.  I mean, aside from making people write down their grudges from through the year.  Psuedo-anonymous grudges.

By the way, Ben, we’re sending your Grievances to you.  In Seattle.  Where it rains a lot. Ahem.

We did do our re-gifting/White Elephant/Yankee Exchange/Whatever this year.  I think people kind of cheated and bought silly things to give.  Next year, we’re switching it up and replacing the regifting with T’s Exotic Spirits game.  We played a miniature version of this ourselves, once everyone had gone home.  It’s… interesting.

This week, we’ll be in Las Vegas for Thanksgiving.  For the first time that I can ever remember, we are not eating at home (mine or my parents) and we are not eating a roast turkey.  We’re actually going out to eat.  Then again, it is only the 4 of us.  Technically, I have enough prime rib leftover that I could feed us all, but I like going out to eat in Vegas.  So many good restaurants, so little time.

Now starts the Christmas shopping and celebrating the surge of birthdays coming up.  Hopefully, we’ll also get some nice, cold, fireplace-fire weather (as opposed to the wildfire weather) to enjoy.  It’s going to be a huge blur of time, I just know it, but it’ll be fun, too.  It always is.

Posted in about, food, poway