Everyone has their own Best Husband Ever, but mine really is The Best.  Aside from putting up with my everyday nonsense, he indulges me when I get an idea stuck in my head that inevitably involves a lot of heavy labor on his part.  And he doesn’t even roll his eyes when I insist it won’t take long to complete.

END_OF_DOCUMENT_TOKEN_TO_BE_REPLACED

Clearing off the memory card, Part 2

Just a few more random photos, not even food related!

Right before our wedding, I noticed there were beautiful blue eggs in this bird house we hung from our patio.  When we got back from our honeymoon, I found these cute little chicks sticking their heads out and peeping.  After a few days, they were all gone!  They didn’t look all that feathered to me, but I also didn’t find any of them in the yard, so I’m hoping they all flew the nest okay! 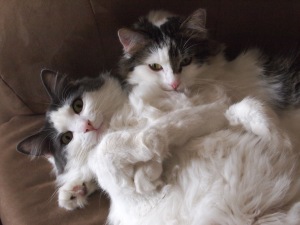 They look all cute and cuddly… and then someone starts to get smushed:

That’s my Cassie-bear!  She’s just a cutie (and also my favorite, totally not a secret).

END_OF_DOCUMENT_TOKEN_TO_BE_REPLACED

Clearing off the memory card

I have a terrible, awful, no-good habit of taking lots of pictures and never moving them off the camera/memory card.  Not all of them need a whole post, but some are worth sharing. 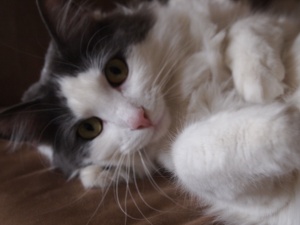 Willie is technically Travis’ cat, but I love him to pieces.  We each picked a kitten out at the shelter and he picked Willie, even though he’s a boy cat and he was a little skittish.  We were only going to get female cats and we wanted cats that were going to be lovebugs (like our Clair).  Turns out, Willie is more of a lovebug than Clair ever was.  If you are sitting on the couch, he will find you, lay down, and fall asleep on your lap.  He is good at spreading around the cat-lazy.  And, so far, the biggest problem we’ve had with him is that he paws at the air instead of covering stuff with the litter.

This was one of the first strawberry harvests from our garden.  Last year, I planted 6 strawberry plants (two varieties) and got just a few berries from them.  Over the course of a year, the plants spread out and took over half the raised garden bed.  This year, I probably pick a handful of ripe berries every week.  Never enough to make a dessert or jam, but certainly enough that we both get to enjoy them.  I wish I knew what varieties I planted – one makes little berries that are super sweet, the other one makes nice, big berries that are still sweet, but not as sweet as the little ones.  Every now and then, I come across a berry that is overripe. Those go to the chickens, who fight over it and chase each other around until one of them finishes it.

END_OF_DOCUMENT_TOKEN_TO_BE_REPLACED

Tagged clearing off the memory card

Thanks to the generosity of Denise, the coordinator for Barbeques Galore’s outdoor cooking school (which is held inside the store, not outdoors, but goes over the concepts of cooking outside), we were invited to sit in on a class to check out some of their new menus and new instructor.  I can’t remember if we first found out about the classes because I was buying a gift for Travis or if he was buying one for me, but we really enjoy them.  They have classes during the week and on the weekends, you get to eat everything that gets cooked, and you get a 15% discount if you go shopping after the class.  We’ve actually held off on purchasing bbq accessories if we know we’ll be taking a class in the near future.  Oh, and it’s BYOB, something that everyone takes full advantage of.  The nice thing is, if you forget (or didn’t know, like us the first time we went), there’s a World Market right next door so you can run in and purchase a beverage of your choice.  The class does put out iced tea and water, as well as veggies and dip and a bread spread.

The last time we took the class, Rich Schmitt was the instructor.  He’s still there, but they’ve added a new chef so when we were invited a sneak peek back into the classes, we figured we should see what John Cardona brought to the mix.  John’s a little younger, a little edgier than Rich, but he’s fun to talk to and turned out amazing food (except for a queso fresco ice cream I wasn’t very fond of… I think it was too savory for my tastes).

We purchased a class gift certificate for our friends to take a class, since they will be celebrating their second summer with a backyard and new grill this year.  Whenever they pick a class, we’ll most likely go with them.  It’s more fun to go with a group of friends, but I also just like going!  You never leave hungry, you might leave a bit tipsy, and you will always learn something new.  Even if you think you know almost everything about food.

So far, the only location in San Diego that offers outdoor cooking classes is the one in 4S Ranch.  That and World Market are the only reasons we even go up to 4S Ranch!  It’s a class that involves big grills and lots of meat – what’s not to love?  Plus, it’s easy to convince guys to take a cooking class with you because it’s all about grilling!  I think the classes are different than other cooking classes/demonstrations out there (except for the Sushi class at The Prado – very hands on and fun!) and make pretty fun gifts.  I’m just sad we keep missing their leg of lamb class.  That would be fun.

I love weekends.  Weekends where the weather is beautiful and we have no real committments are even better.  We kicked off last weekend with some fine Irish pub grub at Patrick’s, then some Rock Band, apple pie, and ice cream sundae-makings, and a couple of late 70s-early 80s wacky movies.   We spent the entire Saturday working in the backyard – making the garden area bigger, tilling the soil and adding amendments, clearing a spot for T to grow hops, securing (and planting) lavender plants, and mowing the lawn.  We were going to build a real fence around the garden, but it would have cost something like $300.  Instead, we bought a couple of posts and T is going to make me a real gate.  The rest of the fence will be chicken wire, as it has been.  Which works just fine, in my opinion – it lets in all the sunshine, keeps the dogs out, and the beans have something to grow on.

On Sunday, to celebrate the nice weather, we took a motorcycle ride out to Julian with friends.  Well, our destination was Jeremy’s on the Hill, a restaurant in Santa Ysabel.  They serve breakfast on Sunday, and we were rewarded with some truly delicious food.  I had the biscuits and sausage gravy; it was definitely not made with lowfat milk!  But, boy, was it good.  T had an omelet with homefries, and it seemed to have the perfect ratio of egg to ham and cheese.  I also snagged a bite of a blueberry pancake and I have to say it was one of the better pancakes I’ve ever eaten.  Maybe one of these days we’ll get to go back for lunch.

We ended up taking the long way home, going through Julian (where apple butter was purchased), down Sunrise Highway, and then back home via some roads that parallel the 8 (don’t ask me, I just follow the bike in front of me).  It should be noted that our little motorcycle gang includes a Vespa, and you’d be impressed by how well that Vespa keeps up.  After the ride, we had just a bit more yard work to do, and then it was conveniently time for dinner.

Because we hadn’t seen enough of them, we also met up for dinner at Domenic’s.  Domenic’s is actually close enough to our house where we can walk to dinner, which we’ve done a few times.  The last time we did that, we took a bottle of wine (they’re running a no-corkage fee promotion) and finished it off, just the two of us, so walking was the safest mode of transportation.  But, Domenic’s is also running a special where you can order any Solo Pasta for $10.  Their pasta list is pretty extensive and I don’t think we’ve ordered the same one in the last few visits.  You don’t get a salad with the pasta, but you do get buttered, garlic carrots and the fresh garlic knots.  Between all that, you’ll definitely be full even without an appetizer or a salad.  This last time, we were talked into getting tiramisu, which was good, but not as good as mine.

After all that, it was back home for pajamas, a little bit of Book Club, and then bed.  After a hard-working, hard-playing weekend, I was definitely ready for bed.  I like weekends like that.  We got a lot of things on our to-do list done, we got to see our friends, and we had a lot of fun.

And now it’s March.  I’m not really sure how that happened, but here we are.

Posted in about, backyard, restaurants