A few weeks ago, I had to work out of my company’s Santa Ana office for a couple of days. Because it kind of covered a weekend, and because we have friends that recently moved to Santa Ana, it seemed like a good excuse to invite myself over to stay with them and save myself a bit of a commute for a couple of days. (Don’t worry, we also make our guest room very available to them when they want to come to San Diego.)

One of my co-workers in Santa Ana is known for his love of food. So, while I was there, I asked him if there were any new spots he thought I should check out while I was in town. Once of his recommendations was 4th Street Market in “downtown” Santa Ana where, coincidentally, my friends had also been already and enjoyed. So, because I’m a pushy houseguest, I asked if we could check it out one night.

I don’t know how to describe 4th Street Market except that it’s like a bunch of food trucks, but instead of trucks they’re in little stalls. You order at each place separately and then grab a table along the way. There’s also a little bar where you can get beer, wine, cocktails, or fancy sodas.

Because I have great friends, and they’re used to me by now, we all split up to get a few plates to share. I headed to pfc for some fried chicken and cornbread, complete with this lime-vinegar-honey dipping sauce. You can order a 2 piece chicken combo, that comes with a side, or order 4 pieces of chicken and then get cornbread separately. The chicken was crispy on the outside, juicy on the inside, but I have to say, if it weren’t for the dipping sauce the whole thing would have been just okay. Not bad, but not outstanding. The cornbread, though, is worth getting even on it’s own. Moist and corn-y and crispy on the edges… even without a good slather of butter it was delicious. 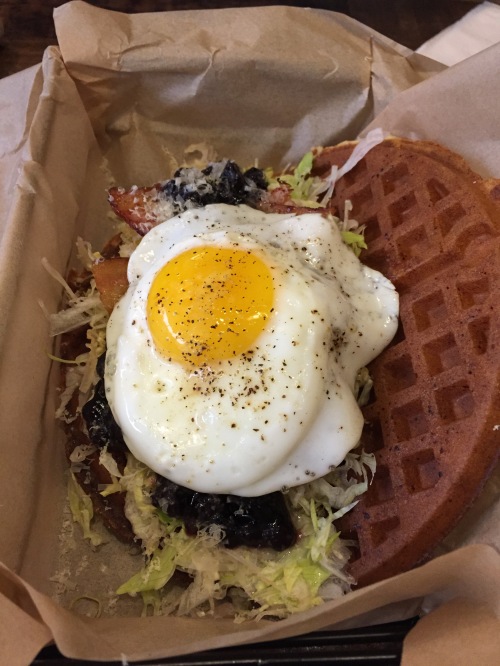 Before I get to this waffle sandwich, let me tell you about the poke bowl at the top. The poke bowl came from Mar, and if all their food is this good, I will definitely be back to try the rest of their menu. I know there’s nothing particularly special about a poke bowl – it’s sushi rice, fish, avocado, and the sauce, but this was really good. The fish was fresh and not fishy tasting (we had tuna and salmon), the seasoning on the veggies was spot on, and the combination of warm rice and cool fish was just really, really good. Trust me, I didn’t think it could compete with fried chicken, so I was surprised that we all loved this poke bowl over everything else we ate that night.

The waffle sandwich was from Ink Waffles and it was a BLT with blueberries and an egg on top. The waffle part was a thinner waffle (not deep pocketed like a Belgian waffle) so it was also a little crispier than I expected. The combination of blueberries with the bacon and lettuce was actually pretty nice, but after the poke bowl and fried chicken, I think we just weren’t impressed with this one.

We debated between an ice cream cookie sandwich, fancy dipped popsicles, or a fancy custom s’more. Because I have the best friends ever, we split a s’more and then got ice cream and cookies. The s’more was gooey and chocolatey, but it’s really just a s’more. Maybe I’m just not a huge s’more fan. I think I like the concept more than the actual s’more itself. I may have the same feelings for cookie ice cream sandwiches – I always want one, but then I end up eating the cookie and ice cream separately. So, from Chunk n Chip I just got ice cream – bananas foster and rocky road – and I was pretty happy.

I would definitely go back to 4th Street Market to try some of the other places and even different menu items from Mar. I think we were there around 7pm on a Friday and it wasn’t very crowded, although the lines were definitely longer an hour later. There was music on the patio and plenty of seating, and a little market on the edge that was fun to wander through.