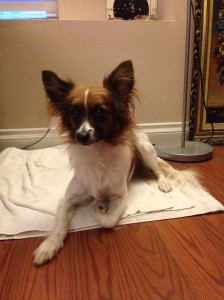 So, this is Toby, one of my mom’s crazy (adopted) foster dogs. He has a brother, who looks like Benji and they look nothing alike. But, they’re both scared out of their wits by anyone other than my parents. My mom had them and their mom since they were tiny pups, so I can’t imagine what happened to them to make them so scared. Their mom was certainly friendly to other people (or at least us, when we went to visit). I like a good challenge (actually, I like an odds-are-in-my-favor challenge that doesn’t take a lot of work), so on our last trip home we brought Toby home to see if we could “fix” him. Toby, at least, stays visible when we visit my parents. His brother hides under furniture the entire time we’re there.

When we got home, Toby was too scared to move. This made it pretty easy on us, since we pretty much just picked him up and moved him to wherever we were going to be (kitchen, couch, bedroom). But then he got just comfortable enough to know he was not at home and he didn’t like it. He’d run away if you looked in his direction, we’d have to herd him out the back door just to get him outside, and we had no idea if he was eating or drinking. For a while, if you cornered him and then just sat still for a while, you could touch his head, lift his paw and pick him up.

My first strategy was pretty much fake-it-til-you-make it: Toby was going to sit on the couch with us, on our laps, until he actually started to like us. This approach lasted a day, as it got really tiring to corner the dog, sit quietly, and try to touch his paw without a freakout every time we got off the couch.

The next tactic was ignoring him. I threw puppy pads around the house for when we were away at work and we just let him hide in a corner all day long. No one bothered him, no one cornered him, no one tried to make eye contact with him. I did see him go up to a water bowl once when he thought no one was looking, so at least he wasn’t going to die of dehydration! This didn’t really work, since I’m pretty sure Toby could out-ignore us for weeks.

Then, one day I was in the kitchen and the dogs came in to see what kind of food was getting dropped on the floor (poached chicken). I saw a small little head poke out from around the island and tossed a piece of chicken onto the floor. Aha! The dog was finally hungry enough to seek out human interaction! I could work with this! I dug up a can of dog food (our dogs get a bucket of dry kibble and they either eat it or not, we’re so mean) and sat on the floor tossing pieces of canned food out, like I was luring a stray cat to come inside. Which, if you think about it, isn’t too far from what I was trying to do. Once we established that there was food to be had, it was good food, and Toby was hungry enough to want it, I started just holding out food in my hand. Eventually, I got him eating out of my hand while the other dogs sat, lay down, shook their paws, and tried to show how good they were being.

I think the long Christmas weekend of having us home all day and night helped. I’d feed Toby in the morning, a snack at lunch, and then again in the evening. A scoop for Toby, a scoop for the house dogs. Pretty soon, he was hanging out in the kitchen or coming up to us while we were eating dinner, to see if it was something he could eat. I fed him in the kitchen, in the living room, in the family room, with treats tossed here and there. He still wouldn’t let you pet him, or pick him up, but at least if we opened the back door he would just run out without much herding.

And then, as we were eating homemade pizza (on the couch, in pjs and sweatpants), that cute little dog pawed at me. And let me scratch his ears. I’m still not sure if he wanted petting or just food, but it was still a little heartwarming. Even after I fed him, he stuck around and put up with all sorts of petting, ear scratches, and cuddles. And then the next morning he ran away like we were never buddies to begin with.

It’s still a work in progress and he’s still wary of Travis (but will accept food from him!), but now he follows me around the house and sometimes lets me pet him without food coercion. We’re sometimes-friends, and that’s okay for now. We’ll just keep working on it and see how far we get.