I LOVE the County Fair. I know people who have lived in San Diego for decades and have never been to the Fair and then they look at me like I’m crazy when I tell them we go every year.  Sometimes more than once, depending on what’s going on and whether we get free tickets or not.  We also have a checklist of things to see/eat that must be done:

This year, we really outdid ourselves.  We went to the Fair two weekends in a row: we went on opening day because I got the $4 tickets from Albertsons, then we went the next weekend (again with discounted tickets from Albertsons) because that’s when the fancy chickens (and I guess fancy ducks) were on display.  For some reason, we’ve never been at the Fair before when chickens were on display, even after we got our own chickens.  The best part of the chickens? Walking by the bantam roosters and hearing their tiny little crow – it’s so cute! They think they’re so tough!

In addition to the requisite grilled corn (fyi – if you buy a pair of tickets from Albertsons, you save $4, which is what it costs for an ear of corn!) and mini donuts, we really ate our fair share of fried foods.  Yes, we spread it out over two visits, but it was still a bit too much. I highly recommend Fair visits with groups of friends so you can share the deep-fried love between more people! 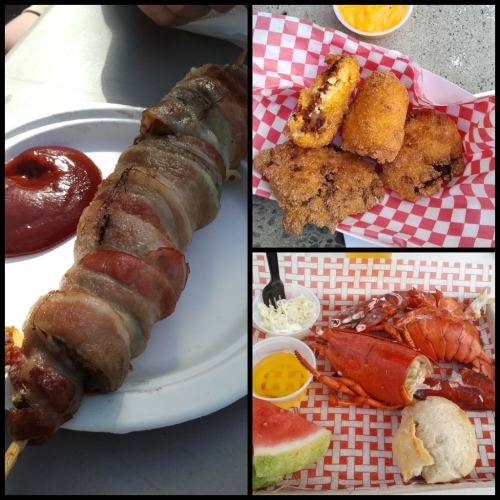 The gouda-stuffed bacon-wrapped portobellos were at the Bacon Affair stand (it was the Heart Attack Cafe or something last year).  It comes as a plate, with fries, but Travis didn’t want the fries and we kind of had to argue with the girl to give us just the mushrooms without the fries at full price.  You can also get the stuffed mushroom battered and deep fried, but that seemed a little overkill to us.  These were one of my favorite “new” items at the Fair.  Despite being wrapped in bacon, it didn’t feel too heavy or greasy and it was really flavorful.

We also tried the chili-stuffed flying saucers, which were basically hush puppies stuffed with chili.  I was skeptical, but they weren’t nearly as bad as I thought they’d be. I skipped the neon orange cheese sauce they came with, but the chili gave enough flavor to the hush puppy part that the whole thing was actually kind of tasty. Could have used some sour cream, though.

This year, there was a Lobster Shack at the Fair.  I was completely skeptical about eating lobster at the Fair, but we figured we might as well give it a try.  My main complaint is that the lobster meal comes with a drink, but their soda machine was broken so all we got was an extra slice of watermelon.  A soda or bottle of water would have been much better, especially when walking around the Fair. The lobster wasn’t bad, but it also wasn’t great.  It came with coleslaw and a roll and the watermelon.  Not something I could recommend, but we enjoyed it for what it was: lobster dinner at the Fair.

We saw some guy walking around with the Big Rib and Travis wanted to try it.  It’s supposedly 2 pounds of steak on a bone, “laser-cut” to size and then smoked.  You can even order it by mail for your next party!  They only had well-done and medium-rare “ribs” when we were there, so we opted for medium-rare. We should have gotten well-done.  When you’re dealing with rib meat, a medium-rare piece means the inside will be chewy and hard to pull off.  At least if it was well-done, we could have cut chunks off and drowned it in some tasty sauces.  Overall, it was huge and filling, but it was also messy and a complete pain to eat.

From what I’ve heard, your enjoyment of the deep fried PB&J highly depended on how much peanut butter you got in the sandwich and how much jelly you got on top.  I think we got a decent amount of both, since each bite we had consisted of peanut butter and jelly. Combine that with a soft bready interior and that good ol’ deep fried crunch and I’d say you have a winner.  This was probably my second favorite “new” Fair food.

We did some good eating at the Fair this year!  I’m looking forward to seeing what they bring next year.