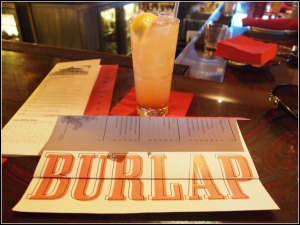 As you may have heard, this guy named Brian Malarkey has been opening restaurants all over San Diego.  Burlap is his second (Searsucker being the first, Gingham the third, and most recently Gabardine) and, to be completely honest with you, I was fairly certain I was never going to set foot in Burlap.  I wasn’t sure about the asian-cowboy-social-dining experience.  I’d already been scarred, but when I heard about their Zodiac cocktails concept, I was admittedly intrigued.

I wrangled Marie to be my blogger-not-just-a-guest companion and we settled in at the bar, where we were graciously cocktailed up by Ian Ward, a Snake Oil Company mixologist.  Oh! And we ran into Lori there! Or, rather, she found us, but it was still fun to see her.

The concept behind the Zodiac cocktails is that you pick a drink based on your Chinese Zodiac astrological sign.  Then, there’s a grid at the bottom of the cocktail menu that shows you which other cocktails you’d be “compatible” with. The only thing missing from the menu is a little chart that tells you what your Zodiac sign is.  So, until they get those little placemats that tell you if you’re a horse or a dragon or a snake, you can look it up here.

In case you’re interested, I am a Horse.  Also, for years, I thought I was a Ram because when you go to Chinese restaurants they list the Zodiac signs by year, but they don’t tell you that if your birthday is in January there’s some adjusting to do.  See, the Chinese New Year changes date every year and is usually in late January/early February.  Which means that a January birthday actually kicks you into the previous year’s sign.  Thus, I am a Horse.  I’m sure you were dying to know.

Ian was generous with his cocktail sampling, but Marie and I shared cocktails so we weren’t completely drunk by the time we left.

I also got to try their housemade plum soda, which was fantastic.  All the flavors of a plum wine but no booze!  And yes, sometimes a drink with no booze is a good thing.  If you’re looking for a drink with a kick (ha!), the Horse is a good contender.  It was delicious but boozy!  Or maybe I’m just a total lightweight.  The Sheep is made with Calpico, which I loved because I grew up on Calpico and we even had the huge bottle of Calpico concentrate so you could mix it up however you wanted.

Of all the cocktails, I think the Rabbit was my favorite.  The basil lemonade gave it great flavor and nibbling on the pickled carrots was a treat, too.

Great cocktails are meant to be paired with tasty bites, which is just what we did.

We also got to snack on the grilled shishito peppers, which were charred, cripsy, soft, and salty.  The perfect bar snack.  Oh yeah, we also tasted the carrot cake, which was everything a good carrot cake should be, but it was sadly overshadowed by that tapioca.

By the time we were done snacking and imbibing, the place was hopping.  The bar was full of groups, couples, singles, and people generally looking for a good time and a good meal.  I’m happy to admit I was wrong in my expectations and I think a second visit is in order to explore more of the menu.  I’m also getting mildly curious about the other restaurants, too.

Burlap now offers Sunday brunch, which showcases a menu that sounds absolutely delectable.  And they have a new executive chef in the kitchen: Anthony Sinsay, formerly of Harney Sushi.  If you haven’t been to Burlap, a visit would be worthwhile.  Based on the Tuesday crowd we saw, though, I’d also recommend reservations.

Many thanks to J Public Relations for setting up our visit and to Ian for spoiling us with beverages and bites!

This entry was posted in food, restaurants and tagged burlap, cocktails, san diego. Bookmark the permalink.

3 responses to “Zodiac Cocktails at Burlap”