Sooo… happy New Year?  I’m not really going to apologize for ignoring this blog for weeks on end.  Life got busy, but the fun kind of busy, and life in the sunshine takes precedent over internet musings any day.  Besides, I was just giving you plenty of time to go make your own tomato jam and candied jalapenos (which I have been enjoying with Brie and waffles as a lazy leftover lunch).

We’ve been doing a fair amount of eating out, thanks to hectic schedules, odd hot wing cravings, and restaurant coupon expiration dates (not all in the same visit).  But the visits have been about eating, ending my hunger, and not really about blogging.   But then Jennifer Jenkins at BAM Communications asked if I’d like to review the menu at Del Mar Rendezvous prior to San Diego Restaurant Week. I have to be honest, it’s been a couple of years since we’ve participated in SDRW.  And we probably won’t make it this month, what with a short weekend trip out of town, my birthday, and a pending baby arrival (not mine!) I was also considering whether or not I wanted to review a restaurant in Del Mar, since we don’t really get up there very often (although, now that I work up there, it’s more feasible).

Spoiler alert: I accepted, we dined, and I’m so glad we did. You’ll be glad, too, since I now have a fun giveaway for you!

Del Mar Rendezvous has been serving the good people of Del Mar for eight years. How it is they’ve never come across my radar confounds me, but there you go.  The owner is the same genius behind Dumpling Inn, Kahn’s Cave, and Dragon’s Den, with some input on China Fun, as well.  Chef/partner Tony got his start in cooking while at Dumpling Inn, so he brings all that talent to the kitchen at Del Mar Rendezvous, too.  One of the managing partners, Dan, gave us the restaurant lineage and was tremendously friendly to boot.

We sat down a little before 7 pm and the restaurant filled up very quickly after that. I was a bit surprised, but Travis reminded me that 7 pm is pretty much prime dining time. To me, 7 pm is a late dinner, which shows you how much of a night owl I am.

Travis was impressed with the beer list and started with a Tripel Karmeliet. I went with a pot of hot tea, but was intrigued by all the various beer specials they have throughout the week.

Knowing that Del Mar Rendezvous is linked to Dumpling Inn, I had to try the steamed pork dumplings (xiao long bao).  I also thought we should try some dishes from the SDRW menu, so I could tell you whether they were worth trying.    So, we had the seared ahi (one of Travis’ favorite things) and the spicy ginger eggplant (I am a sucker for eggplant dishes).

The seared ahi portion was huge! There were at least ten slices, maybe more – I don’t know, I didn’t think to count. I kind of just kept placing them in my mouth.  the ahi was fresh and tender, with a nice sesame crust on the outside. Not too thick, not too thin… just right.  The pork dumplings were delicious, too!  They have a slightly thicker wrapper than the ones at Dumpling Inn, which I actually appreciate because I think it keeps the soup in better.  I always feel like my dumplings at Dumpling Inn lose all their soup before they get to me.  I did miss the slivers of ginger to eat with the dumplings, but the dipping sauce was tasty.  Travis didn’t even use the dipping sauce; he thought the dumplings were flavorful enough on their own.

Now, the eggplant was my favorite of our starters.  I love eggplant to begin with, and this dish was full of soft, creamy eggplant, covered in a (not spicy) sauce I almost wanted to lick off the plate.  I fully intended to save most of it to take home, since I knew we still had entrees coming, but I kept eating “just one more piece” and before I knew it, there were only three pieces left on the plate.  Not much sense in taking three pieces home, so we ended up finished that dish pretty quickly.

For entrees, we got the kung pao pork tenderloin, which I believe is an SDRW-only dish, and the walnut shrimp (mainly because of Mary’s review but also because I love a good walnut shrimp). I have also had quite a few bad walnut shrimp dishes, so I consider myself a good judge of the stuff.

I’m pleased to tell you that the walnut shrimp lived up to my expectations and more.  First, the shrimp are not tiny at all – I would call them three-bite shrimp. You could eat it in two bites, but they would be big bites and you’d look pretty silly trying to chew it.  Or maybe you have a bigger mouth than I do.  The shrimp aren’t overly coated with sauce (slightly sweet and slightly creamy, not all white and gloppy like some places) and the coating is so light and crunchy.  The walnuts are candied and the broccoli was perfectly cooked.  No mushy veggies!

The kung pao pork came sliced, and Travis was impressed that the sauce made it in between each of the slices of pork.  I was a little hesitant to eat it with chopsticks, but the pork was so tender that it was super easy to bite it in half.  And the snow peas were crispy and crunchy, too. We actually saved half the pork to take home, mostly because pork reheats better than walnut shrimp. And because I wanted to save some room for dessert.

I was debating between the mud pie and the xango (banana cheesecake wrapped in cinnamon pastry), but Travis felt that cheesecake would be too much after such a filling meal.  After typing out what xango is, I kind of wish we had tried it, but I’m also pretty sure we’ll be back soon, so I can just wait until then. 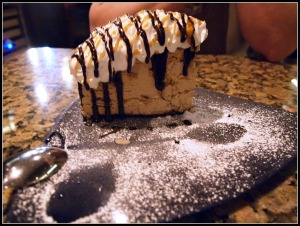 The mud pie was a tower of ice cream on a cookie crust, studded with almonds. I just realized the ice cream flavor is mocha almond fudge, which would explain the almonds. I told Travis the ice cream was coffee flavored – oops.  Eating the mud pie made me realize how much I enjoy mud pie and left me wondering why I don’t eat it more often.  Dan said they are thinking of adding a more Chinese-style dessert to the menu, but I can see how that might be a tricky balance when catering to Del Mar palates.  I’m just happy they have a dessert menu.  Sometimes a fortune cookie just isn’t enough.

We were pleasantly surprised at how much we enjoyed our dinner.  Travis said it was the best Chinese food he’s had in San Diego, while I would note that the category doesn’t include things like dim sum, Peking duck, or Schezuan-style dishes.  But since Del Mar Rendezvous says they are Chinese fusion cuisine, I’ll go along and say they really do have top notch food.  I can guarantee we’ll find ourselves back there when I get a craving for eggplant.  Or walnut shrimp.  Plus, there are pages and pages of other items we’ll have to try!

Now – onto the giveaway!  I have one (1) certificate for two (2) SDRW meals for you.  All you have to do is a leave a comment on this post and tell me what you’d have for dinner at Del Mar Rendezvous, either off their SDRW menu or their regular menu.

The giveaway will end at 11:59 PM, Tuesday, January 10th, 2012.  The winner will be chosen at random and contacted Wednesday the 11th.  I hate to make it such a short window, but I need to get the certificate in the mail before we leave for Portland.  And I want you to have it in time for SDRW!