In a completely separate conversation than the other Restaurant Week Fiasco, I was invited to The Cosmopolitan in Old Town for dinner and to experience some of the new dishes new chef Andrew Sasloe had created for San Diego Restaurant Week. Travis and I hardly ever visit Old Town, and then usually only if we have guests in town. The last time we’d been in Old Town, there were still ladies making fresh tortillas in front of Casa de Bandini… So, naturally, I was curious to see how The Cosmopolitan looked and how the food was.

We were greeted by Catherine Miller, one of the investors and, I suppose I’ll call her, general manager and then led to where Delle and her husband were waiting. It was actually very nice to be able to sit with Delle and chat for a bit, since it’s rare I ever get to meet the PR people who generously invite us to so many events. We learned that The Cosmopolitan is meant to reflect the time of early San Diego development, which is why the menu includes a lot of American dishes. It used to be solely American dishes but its hard to be a restaurant in Old Town and not offer some sort of Mexican fare. For that reason, their Restaurant Week menu was actually two menus: an American menu and a Mexican menu, but you could order off either one and mix and match dishes.

We actually had a hard time choosing what to order: it all sounded really good and I wasn’t sure if I wanted to try something new or if I wanted a dish that was also on the regular menu (I mean, if it was good, I wanted to be able to have it again!) I ended up ordering the Scallop and Shrimp Duet for an appetizer and then the Pork Cheek Confit for my entrée. Travis picked the ceviche (he loves a good ceviche) and the Cola Braised Chicken Chili Relleno. There’s a regular chili relleno on the menu, but I don’t think it’s stuffed with chicken.

There were also cocktails: a margarita for Travis and a fruit-smashed bourbon drink for me. Both were beautiful and delicious: not too sweet, a good mix of flavors, and plenty boozy. I actually gave half my drink to Travis since I had to drive myself home later. I’m such a lightweight. 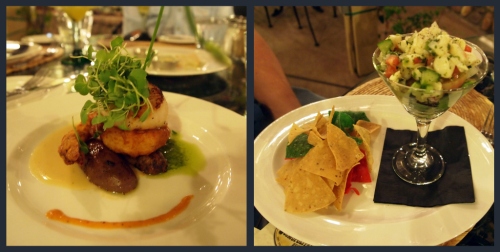 The Scallop and Shrimp Duet had two lightly battered shrimp and a perfectly seared scallop resting in a dish with the creamiest, buttery fingerling potato I think I’ve ever encountered. The scallop was crisp on the outside but so creamy in the middle, not a hint of rubber to be found. I almost didn’t share a bite with Travis, it was that good. Come to think of it, I don’t think he ever got a bite of that potato.

The ceviche came served with tri-colored tortilla chips and was very nicely done. There was a good mix of seafood, and it wasn’t fishy or too tart from the lime juice. Incidentally, The Cosmopolitan is trying to move away from serving chips and salsa on the tables. We had a bread plate with white bean hummus and a fig butter (mmm… fig butter…) and I don’t think I missed chips and salsa one bit.

I’m usually not a fan of chili relleno because I’ve had too many that were heavily battered, soggy, and greasy. The Cosmopolitan’s chili relleno is the complete opposite: lightly battered, crisp and crunchy, giving way to a tender pepper bursting with chicken, beans, and cheese. All that was left on the plate when Travis was done was the pepper stem. I think if the stem had been battered and fried, he would have just eaten that, too.

And then there’s the honey glazed pork cheek confit. I love beef cheeks – I can hardly order anything else if I see it on the menu – but I’ve never had pork cheeks. Once I even heard of this dish, I knew I had to have it. Oh, I’m so glad I did. Tender, moist nuggets of porky goodness enrobed in a slightly sweet glaze that matches the pork flavor perfectly. It was delicious. I would order it again in a heartbeat.

This is where I have to admit something to you: none of the dessert choices on the Restaurant Week menu caught my eye. I kind of wish we had ordered off the regular menu, but I felt like we needed to showcase these new dishes the chef created just for the event. In retrospect, since this post is obviously going up after Restaurant Week, it would have been better (for everyone) to have enjoyed some of the regular desserts that are always available. We ended up with the bacon chocolate chip cookie ice cream sandwich and bread pudding.

The bread pudding was huge and warm and chock-full of fruits and so moist. It sat upon a caramel drizzle and had a puff of fresh whipped cream by its side. Yum. The ice cream sandwich was just okay. The maple walnut gelato was delicious, but the cookie itself was a little crumbly (you know I love a good chewy cookie) and I didn’t feel there was enough chocolate in the cookie to balance out the bacon. Had it been up to me, we would have been eating fresh churros and a butterscotch pot de crème, but I guess that just means we’ll have to go back for cocktails and dessert.

Many thanks to Delle Willett for inviting us to be guests of The Cosmopolitan!