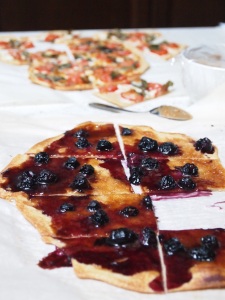 Every since Smitten Kitchen’s latest flatbread recipe appeared in my feed reader, I’ve been obsessed.  It’s like an addiction in the worst way. You never know when the craving is going to strike and you start wondering how much flatbread one person can eat before they need to admit they have a problem.

The worst part is, you can get your fix within minutes.  The dough comes together easily with no appliances needed.  Once it’s rolled out, it bakes for 5 minutes, you add cheese (cheese!) and then let it get crispy for another 4 minutes.  At most, you’re eating warm, honey-ed, salty flatbread within 15 minutes of even thinking about it.  Do you know how dangerous that is?

For once, I started with the original recipe – AP flour, olive oil, honey, sea salt, and thyme.  I followed the directions, thinking the whole thing was way too easy, and then I was hooked.

Okay – I deviated slightly: I didn’t have Mahon cheese or Romano or any other firm cheese to grate. So, I used this semi-firm Spanish cheese that was slightly nutty and it worked out just fine.

I may have placed a clump of the grated cheese directly into my mouth.

You mix the dough in a bowl and then knead it on your counter until it’s smooth and pliable.  One recipe makes 4 flatbreads.  You may be tempted to make a double batch, but unless you’re doing this for company, I can assure you that one batch is going to be more than enough.  I found that rolling the dough onto parchment paper is the best method (duh – that’s what the recipe says to do!)  I tried rolling it on my Silpat, but the dough wouldn’t stay stretched out and thin.  It seems to stick to the parchment paper perfectly, allowing you to roll it out as thin as possible and not worrying about it shrinking back down.

I don’t have a baking stone, but I’ve used the back of a baking sheet placed in the oven, a cast iron griddle, and just sliding the parchment paper directly onto the oven rack.  For me, it’s all worked just fine. 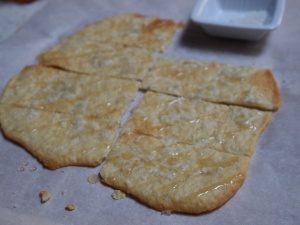 Yeah, it’s not as artfully styled as Smitten Kitchen’s, and this one’s missing the flecks of green from the thyme, but it does have the honey and sea salt.  And the cheese. It was also the first one out of the oven and the only one photographed.  When it’s warm, it’s a crispy flatbread with a slight chew and almost flaky.  Your fingers get a little sticky from the honey dripping off and there’s a salty crunch with every bite.  The thyme is subtle and herbal and also goes well with crumbled goat cheese.  Once I had a taste of this, the camera was forgotten for the rest of the night.  I may have eaten three of these all by myself before Travis even got home.

I may or may not have considered shoving the last one in my mouth when I heard his car pull up and pretending they never existed.  Don’t worry – I ended up sharing and he loved them as well.

Since that first attempt, I’ve made them with honey and sea salt; honey, goat cheese and sea salt; with cheese and without; even with half whole wheat flour.  I’ve even mixed the cheese right into the dough to make things easier.  They’ve all been delicious.

Then, I found myself with ricotta, an abundance of basil, and some tiny Roma tomatoes.  I didn’t want to wait for pizza dough to rise, so I whipped up some flatbread.  It’s not like a thin-crust pizza; the flatbread lacks that pizza crust chew, but it is easy and fast and equally delicious.

With the last piece of dough, I spread some caramel sauce over the thin dough and scattered blueberries on top (that’s the picture up top).  Dinner and dessert, all in one go.

I have to warn you, though. Because it’s such a quick snack to make, you might think you’re going to make some as a pre-dinner snack, something to tide you over until dinner is ready. I feel obligated to tell you that isn’t going to happen.  You will end up eating the flatbreads as they come out of the oven and then you won’t even want dinner anymore.  So, I say: don’t worry about it.  Make these flatbreads and just accept that it’ll be the easiest dinner you’ve enjoyed in a long time.

This entry was posted in food, recipes and tagged flatbread. Bookmark the permalink.

6 responses to “Fun with Flatbreads”