Our second visit to the Fair was compliments of the Fair media and marketing department – two tickets in the fancy media/vendor gate, a little goody bag with flyers and pamphlets and a cookbook of last year’s winning recipes, and a little tour of the popular food vendors. 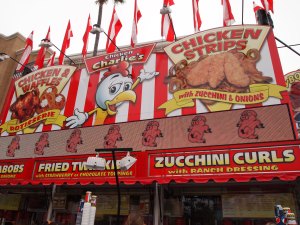 We started at Chicken Charlie’s (also home of the cheesy zucchini curls!) for the deep fried Kool-Aid. 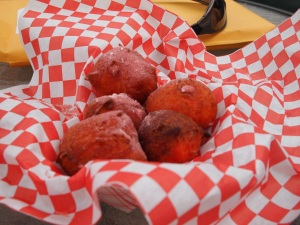 Little fried dough balls, colored bright pink from the Kool-Aid (cherry?) in the batter, then rolled in Kool-Aid powder so it’s all tangy-sweet. 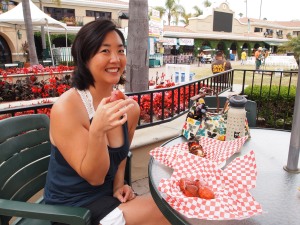 I suspect some of the appeal came from the fact that they were hot out of the fryer.  But they really weren’t that bad – they weren’t as sweet as I thought they’d be, the Kool-Aid powder was kind of like eating a Fun Dip thing, and the texture was pretty nice.  Chewy, but still doughnut-y.

We were also offered something else from Chicken Charlie’s, but the fried chicken and waffles weren’t ready.  So, we opted for a chicken kabob.  It seemed like the right thing to do, since I knew we’d have another day of deep-fried gorging ahead of us. 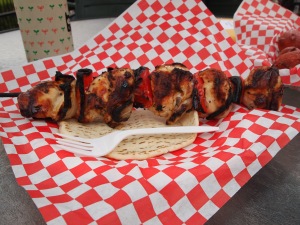 Five huge chunks of grilled chicken, with slices of red onion and peppers.  The end pieces of chicken were a little dry, but the middle pieces were moist and juicy.  It was served on half a piece of unwarmed pita, which Travis ate with the chicken.  I was actually pretty full after splitting this kabob and was thinking it would be a really good item to eat at the Fair if you didn’t want to clog your arteries.  And then we went back to look at the prices (disclosure: we were given complimentary admission, deep-fried Kool-Aid, the chicken kabob, and Australian Battered Potatoes, in case I didn’t make that clear).  The chicken kabob is $10!!  I guess it’s only a few more dollars than the deep-fried foods, so maybe you’re paying for the healthiness factor, and it was a generous kabob of chicken, but I still felt that was a lot of money for one item on a stick.  But, it was good and it wasn’t deep-fried. 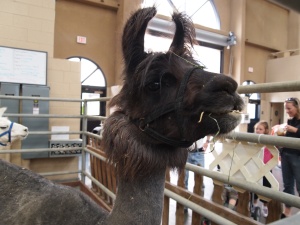 We walked through the AgriFair building and I swear this llama started posing once he saw my camera!  I love the llamas, but I’m always wary that they’re going to spit on me. 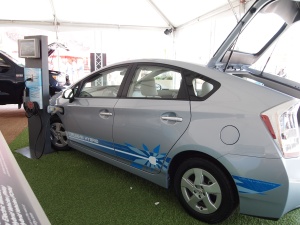 After looking at the livestock that I will probably never own (totally want a goat!) we went in search of the Toyota tent.  I had heard they’re going to start rolling out a plug-in hybrid and Travis wanted to see some of their new Prius designs.  I was a little disappointed to see that the plug-in looks exactly the same as the regular Prius, but I think it’s cool that it will run off the electric motor and then revert back to hybrid mode once the battery is depleted. 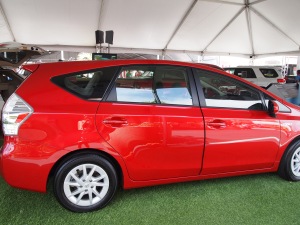 Travis really liked the Prius V (“V” as in Vendetta, not Roman numeral 5) – it has 60 percent more cargo space, the rear seats move back and forth and the front console is very nicely designed.  If they were going to make the Prius V as a plug-in hybrid, I’d be all over that.  Not that we’re in the market for a new car.  Our current Priuses (Prii?) are running just fine.  Yes, we both have a Prius.  And we recycle.  And I compost, grow our own tomatoes, and raise chickens.  What of it?

Note to Toyota: if you are looking for someone to talk up your new models, I would be HAPPY to drive around in a new Prius model and tell everyone how awesome it is.

Note to my dad: if you are looking to purchase a new Prius model and need someone to take your really-not-old-at-all Prius off your hands, I am happy to do so and tell everyone how awesome you are. 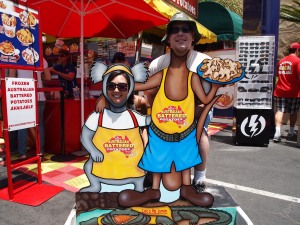 By this time, were found ourselves hungry enough for more food, so I called Lauren up and she met us at the Australian Battered Potatoes stand.  Did you know you can now order potatoes by the bucket?  Well, you can. I just hope you have 20 of your best friends to share it with, because that’s one heck of a lot of potatoes. 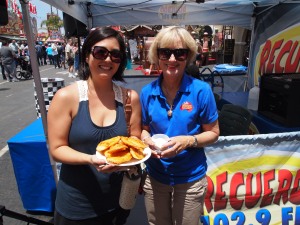 I got a picture with Carmen, owner of Australian Battered Potatoes, who is the sweetest lady I’ve met.  We had opted for sour cream and sweet chili sauce instead of drenching the potatoes in cheese and/or ranch sauce and she told us the best way to eat them was to dip the potato in sour cream first, then the chili sauce. 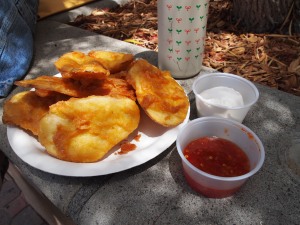 A pile of battered potatoes!  I actually really liked these.  Believe it or not, it’s the first time I’d ever had one.  I think because we usually go to the Fair with just the two of us, and a whole plate of battered potatoes seemed like too much for just 2 people.  Never mind that there were just 2 of us that day!  I tried the potatoes in sour cream, in chili sauce, plain, and with sour cream and chili sauce.  I like them best with sour cream and chili sauce.  We managed to eat all the potatoes except one… we just could stuff ourselves any more!

We wandered through some more exhibits and then got some grilled corn. 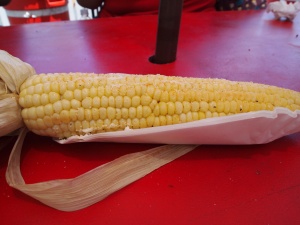 You can’t see it, but this corn is covered in whatever “butter” sauce they put in the squeeze bottles, lemon pepper, and Lawry’s seasoned salt.  It was GOOD.  Now, an ear of corn costs $4, plus or minus about 20 cents depending where you buy it.  Considering you can buy an ear of corn for $1 when it’s not on sale, this is a pretty good markup.  Want to know what’s an even crazier markup?  The grilled artichoke.  Guess how much?

No, really, go ahead and guess…

We walked through the vendor buildings, bought a Furminator-like dog brush/rake (the rake part does a good job getting the tufts of undercoat out of Sadie’s fur) and two picnic food tent thingies.  We also talked to some whole-house fan people and special-magic-paint-like-coating for the house people.  We may have been in a carb coma.

And then, before wandering through the garden exhibits and heading home, we did one last thing.  Something I had been waiting to try because it sounded so ridiculous it just might have been good.  Something that no one else had tried; therefore, no one warned me away from it. 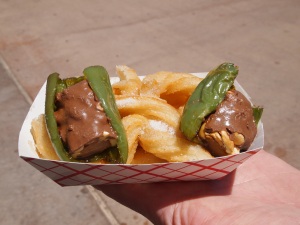 What is that?  Why, those are Baby Ruth-stuffed deep fried jalapenos served on a bed of fresh churros! (side note: a Mexican funnel cake is nothing more than a pile of circular churros)  Now, I’m not sure what I was envisioning.  Maybe something like a jalapeno popper?  Or a stuffed pepper battered and deep fried?  This was a jalapeno, sliced and cored, fried (maybe deep fried?) and then stuffed with a not-gooey piece of Baby Ruth.  Served on churros.  One pepper was really, really spicy-hot. The other was just green-peppery. It didn’t really go with the Baby Ruth.  Maybe if the candy had been gooey or if it didn’t have peanuts or something.  I was disappointed.  And yet, proud that I tried something ridiculous so I could report back to you!

Thank you so much to Jeanelle and Lauren for letting us experience a leisurely day at the Fair and for the tasty food sampling!  It was really nice to wander around at our own pace, not worrying about whether or not we were boring anyone.  I’m excited to eat Australian Battered Potatoes again, but I will definitely need more people to share with.  We didn’t get any mini donuts because we were so full, but I’m hoping we get some on our next visit.

I love the Fair!  If you haven’t been yet (or have never been, and what kind of San Diego resident are you?), the Fair is running through this holiday weekend and then it’ll be gone for another year!  Go now while you still have the chance!

Travis will be judging at the Fair this weekend, so I’ll probably go with him for one more visit.  This year, I will probably have ingested more bad-for-you food from the Fair than ever before.

So… what else should I try?