the cuteness… it kills me

My mom is fostering a little pup believed to be a Chow-Shepherd mix who is almost as cute as Cassie was when she was a pup.  And that’s saying something. 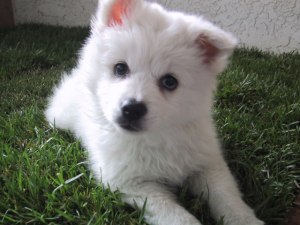 Someone found him in the parking lot of Walmart.  A Walmart in Vegas.  In the summer.  Which makes no sense (aside from being super mean) since he was obviously taken care of and well fed.  It’s really anyone’s guess where he’ll end up – I’m thinking he might enjoy living in Austin with my sister.  She’s staying in Vegas for a while until she moves out there; how could you live with that puppy and not want to take him with you?  My mom thinks he’ll get too big for her to want to keep him, even though I say he has itty-bitty paws, which obviously means he’ll be a small dog.  I can tell you he won’t end up in Poway, unless Travis has a stroke or something and forgets we already have 3 substantial-sized dogs.

So… anyone looking for a puppy?  Free delivery!

I wonder if his ears will always be floppy

6 responses to “the cuteness… it kills me”