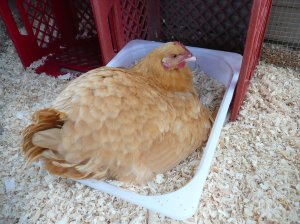 this is a broody chicken

whoa! what is that?

that's the tiny chick we smuggled under your chicken butt to trick you into not being broody!

But it didn’t really work.  At least, I don’t think so.  We swapped a grocery store egg (that Buffy had been sitting on) with this tiny Barred Rock chick so Buffy would think her egg hatched.  Supposedly, she’s supposed to now take her chick on outings and teach her the chicken ways, but all she does is sit on her nest and get puffy.  The little chick pops out now and then to eat (so at least she won’t starve) and then pop back under Buffy.  Buffy hasn’t attacked her and she’s keeping the chick warm, so I guess that’s all we can really ask for.  I have to admit, it’s really cute to watch this chick hop on Buffy’s back and slide down a wing.

Next up: partitioning the coop so it can house crazy broody mama and the chick, with Dusty and Ginger (Pearl is, sadly, no longer with us; hence the new chick as replacement/broody breaker attempt) in the hopes they all learn to get along at some point.  The two chicks are just getting too big for their brooder!

Chickens are addictive.  Thank goodness we actually try to follow City ordinances (which limits us to 6) or I’d be in trouble.

This entry was posted in chickens. Bookmark the permalink.