It’s a blast from the past!  Not to mention an actual post about food!  With pictures (even if they are poor iPhone pics)!

So… back in February, we went to Denver (and surrounding areas) to visit some of Travis’ friends and see the new babies that are now walking and (practically) talking.  Yes, this post is 2 months late.  You should prepare yourselves for the posts from our New York trip I still haven’t written.

Because we were going to be bouncing around every day, visiting all these different people in different areas, I’d pretty much accepted that we’d just be eating whatever was convenient to wherever we ended up.  Except for the night we landed and the night we were leaving.  Since we had an 8 PM flight out of Denver and most of my choices didn’t even open for dinner until 5 PM (or later), I had to get a little creative.  Thus, I tried to plan a dinner at Bones for the night we arrived.  Because we were arriving on a Thursday and our flight was scheduled to come in at 8:30 PM, we had a very small window to make this happen (if we were flying in on a Friday, I would have had an extra hour before closing to play with).  I made the latest reservations I could, Travis signed up for the rental car “club” so we could pick up our car through a kiosk, and I started salivating over pork belly buns and lobster ramen (I was missing the pork belly buns from Ssam Bar).

I don’t know what I did to make the Universe mad at me, but it seemed like everything was conspiring against our making it to Bones for tasty food.  Our flight was delayed (the incoming flight was late, it took forever for people to board, plus we got stuck in the departing “line”).  The pilot said we’d make it up and actually land in Denver early.  He lied, we made it into Denver late, and I’m not ashamed to say I did not let people with connecting flights get off the plane before me.  I had a connection to make, too!  An important connection with tasty pig parts!  We race out of the airport and wait for the rental shuttle to show up.  I swear, we always rent from the company that has 1 shuttle when everyone else has 4 circling around.  Then, when we finally got to the rental counter, the kiosk would let us access our reservation.  We had to wait in line!  We finally get the paperwork done and go pick a car.  Wouldn’t you know it?  The car we picked has no gas.  Like, I don’t think it would have made it to the exit station.  So, we turn around and try to find another car and end up with some stupid Kia that barely goes 65 on the freeway!  Meanwhile, I’m constantly calling Bones, speaking with the lovely host Adam, telling him where we are and trying to figure out if we’ll make it before they close up.  He must have thought I was crazy, working so hard to eat there.  But we only had one shot!

We eventually get to Bones, after hitting every red light possible, and find a parking spot right across the street (of course we do, it’s practically 10 PM and everything’s getting ready to close!)  The second we get in the door, I let out a huge sigh and I swear everyone in there knew exactly who we were.  They were very nice about it all, though, and Adam brought us a glass of sake, sensing we needed a stiff drink to start off with.

I have to give many props to poor Travis for not only putting up with me through that whole craziness, getting us to Bones in a calm and orderly manner (while trying to go as fast as the car would allow), and not asking me what the big deal is and why we couldn’t just eat somewhere else.  He’s a good man.

We started with pork buns, of course!  It’s why we were there!  They were completely different from the ones at Ssam Bar, but delicious in their own right.  The buns were a little chewy, and the pork belly was cubed instead of sliced.  But, the pork belly also had a crispy later on top, which just makes you love pork even more.  There’s also a version of buns with suckling pig, which I contemplated ordering, but I’m a sucker for pork belly.  I can’t help it. 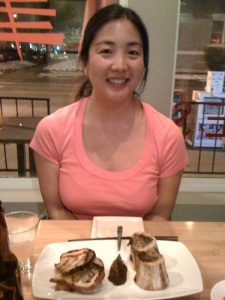 I’m also a sucker for bone marrow.  Even though I know how easy it is to make at home, I can’t resist ordering it if I see it on a menu.  Mainly because I don’t have to cook it, and also because it’s usually accompanied by some tasty condiments that I probably wouldn’t have at home.  This came with crispy/chewy bread slices and a figgy jam.  A smear of jam on the bread, with a dollop of marrow and a sprinkle of salt?  Incredible.

Travis was excited to see they had a good beer list.  Here he’s enjoying a Lion Stout from Sri Lanka… it was very smooth.  I think.

Then, even though we were so full (at least, I was), we ordered ramen.  Because everything I’d read said that it was a must-eat.  Travis had the pork shoulder ramen with a poached egg and I got the miso lobster ramen.  I’ve eaten a lot of ramen in my life and I’ve never had anything like this.  The miso was very subtle – instead, the ramen broth was full of lobster flavor with a rich, buttery mouthfeel.  The noodles were perfectly chewy/soft and the edamame got tangled up in the noodles to add a little texture.  But the broth was amazing.  Travis’ ramen was good, too, but not life-changing.  Lobster ramen?  Life changing.

We didn’t get dessert there, mainly because I couldn’t have shoved another morsel (not even a wafer thin mint) into my mouth.  And, the dessert menu didn’t look as enticing and the rest of the food.  It was a really good meal and if we’re in Denver again I’d love to go back.  I’d have to go hungry, though, because there are more appetizers I’d like to try, but I don’t think I could pass up the lobster ramen.

Many thanks to the staff at Bones who encouraged us to keep trying to arrive on time, serving us well, and not making us feel bad for being the last diners there (in reality, we weren’t there much longer after the last people left).  It was an amazing meal and well worth the drama to get there!

This entry was posted in food, places, restaurants. Bookmark the permalink.