Is it too late to say Happy New Year?  It’s still a pretty new year…

We spent our holidays at home, laying low, and generally enjoying the down time.  Especially considering we’ll be hopping on and off of planes and taking various road trips in the next couple of months.

I’ve been taking advantage of my Blockbuster by Mail subscriptions lately, renting various workout DVDs and then exchanging them in-store for a new release.  So, we’ve gone through quite a few movies during our long weekends.  We watched Angels & Demons (I think I was too busy wondering what Ewan McGreggor would do as a priest to see the ending coming), Twilight (yes, we watched it; mainly to see what the fuss is about and to find out what vampires look like when they glitter – Spoiler: they look like glitter), Inglourious Basterds (entertaining and quirky, and then we figured out it was a Quentin Tarantino movie and it all made more sense), District 9 (I didn’t like and really wanted the main guy to just die already), and Four Christmases (I like Reese Witherspoon, Travis likes Vince Vaughn, it was pretty much a win/win movie).  The funniest thing about Four Christmases was the baby puking.  Because it’s exactly like that in real life (I suppose Vince Vaughn’s reaction is pretty spot-on, too).  If you’ve ever had a baby throw up on you, you’ll appreciate those parts of the movie.

I haven’t committed to any New Year’s resolutions, nor have I signed up for the 10 in 10 challenge, but I am still on that never-ending quest to get a little fitter and a little lighter.  Also, because I started months ago, I consider it a continuing and ongoing habit and not just something to start once January hits.  I was doing pretty well before Christmas, then kind of hit a snag, and now hopefully I’m back on track.

We’ve been eating pretty well lately.  I managed to not cook on both Christmas Day AND New Year’s Eve, but I did cook most of the meals around those days, so I think that’s a good trade-off.  Since we both worked on New Year’s Eve, we just went for an early dinner at Luc’s Bistro (still my favorite place to eat in Poway).  The next night I cooked up some lobster tails I snagged at Henry’s, and then I made Shrimp Fra Diavolo using Rao’s arrabbiata sauce and fusilli pasta (also found at Henry’s).  I dusted the shrimp with a mixture of flour and cornstarch, though, instead of just flour and it made the shrimp light and crispy.  It was actually a really good meal.  We still have half a bottle of the sauce left, so I might pick up more shrimp and do it again.

Then it was a meal at Indigo Grill ($20.10 Anniversary Week through the 8th!) and it was good enough to make me want to go back, which I think is a sign of a successful promotion.  There are a lot of Cohn Restaurant Group haters in San Diego, and I do agree that some of their places are overpriced and underwhelming (like Mister Tiki), but I have also enjoyed meals at Thee Bungalow and the Gaslamp Strip Club (more for the fun of it than anything else) and now Indigo Grill, so I think sweeping them all under the rug is a little uncalled for.

In chicken news, they are getting so big and heavy, but no eggs yet.  Granted, they’re still too young to be laying eggs (maybe next month?) , but I keep hoping they’re overachievers or something.  Lexi got into the coop one morning when I was bringing them treats, got a mouthful of Bunny, and now they’re all wary when I let them out in the morning.  They used to run right out to see what treats I brought; now they sit in their coop and give everything a big stinkeye and only when I show them something enticing will they come down. 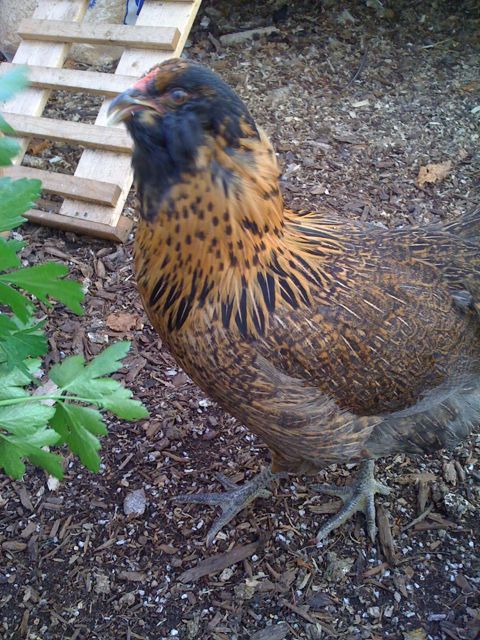 Bunny is definitely top chicken in her coop 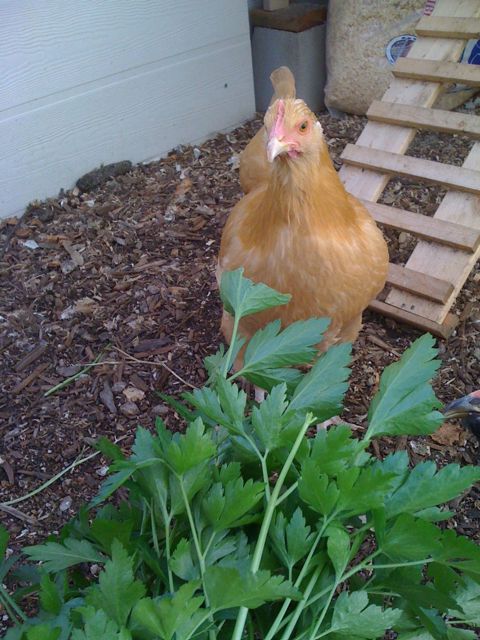 Buffy is a big girl!

This entry was posted in about, chickens, movies. Bookmark the permalink.

8 responses to “Still a new year”