I know I said there would be pictures of our New York trip and the fabulous meals we enjoyed, but you’re getting a short post on our crazy dog first.  Because it’s easier.

We walked by a doggy boutique in one of the various neighborhoods in New York (on our way to/from the subway and/or to/from some restaurant) and Travis asked if they had an indestructible dog toys.  The lady pulled out a stuffed lamb and said it was very tough and a good toy because if a dog happened to pull a leg off, the limbs were not connected to the main body so the stuffing couldn’t get pulled off.  We took one look at it and knew it would last five seconds before being de-limbed, de-squeaked, and de-stuffed by Lexi.  She seemed dubious about our claims of this destructive dog of ours, but then pulled out a squeaker ball disguised as a bunny.

Lexi wanting the squeaker So Badly

Sadie investigating the chaos under the bed 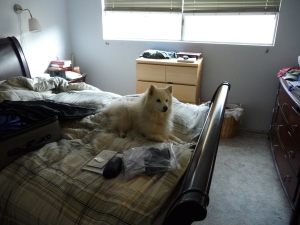 Cassie being cute as usual 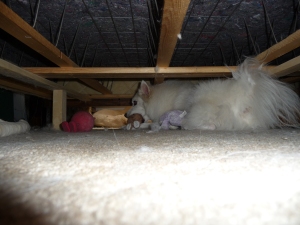 our crazy dog under the bed with her toys

This entry was posted in dogs and tagged destruction, dog toy, eskie, lexi. Bookmark the permalink.

One response to “Our crazy dog”