It seems like we’ve been All Chickens, All the Time around here lately.  I guess that’s normal.  These chicks are my new hobby and hopefully will be the new composters (yes, I still have the worm bin, but you’ve got to admit the chicks are way cuter) and we check on them all the time, so it makes sense we have chicks on the brain.  Which is different from having a chicken brain.  Maybe.

I was actually sent a promotional pack of new Charmin, which I meant to share with you (and will) mainly because I found it all to be interesting.  I also have a new Febreze scent diffuser, which may be my favorite so far and way better than the Glade Wisp.

In the meantime, enjoy these chicky pictures and know that they look completely different already.  Lady Orpington is really starting to feather out and get big (so big!)  They’ve also gotten pretty used to being picked up and handled, since we’ve made a point to hold them every night.  And they’ve discovered their wings and if you hold Lady Orpington, Bunny will get lonely (or maybe jealous?) and flap her way onto your arm.  Which they both climb and jockey for prime position on your shoulder.  And then they’ll poop on you.  Or sleep.  Sometimes both. 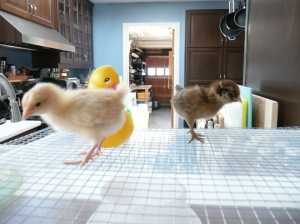 Lady B is way bigger than Bunny 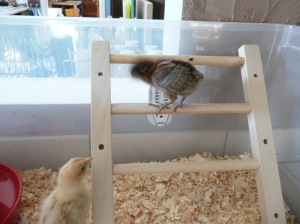 they've started perching, but still sleep on the floor

Bunny is so pretty!

can you see the crazed look in her eyes?

This entry was posted in chickens, product review. Bookmark the permalink.