hot chicks in the house 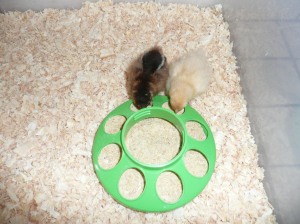 Even though just a few months ago we saw dozens and dozens of tiny, fuzzy chicks at feed stores, I guess chick season is starting to dwindle?  So, after working So Hard to finish a chicken coop (therefor proving that the chickens would have somewhere to live once they grew up, I guess), I called the feed store to ask if they had any Silkie chicks.  And they said no (she said Silkies are seasonal).  Not only didn’t they have fancy chicks, they had no baby chicks at all!  And I was sad.  All that work (I even dragged my mom into helping me!) and now no fuzzy chicks.

But I am well loved and an additional call to the Ramona Kahoots was made.  They had plenty of chicks, just not the fancy ones.  So, we bought two: a Buff Orpington and an Americauna.  That way, when we do find a Silkie chick, we will still just have three chickens.

The chicks are as-yet-unnamed, but they have a nice home in a large Sterilite bin with plenty of water, food, and bedding.  The hardest part has been figuring out how high to hang the heat lamp.  I read that chicks need to be at 95 degrees for the first week, but my heat lamp is making their bin feel like Las Vegas in the middle of summer.  They seem to be okay now, though, since they’re hanging out under the lamp instead of running away to the edge of the bin.

They are extremely cute, and are currently driving Lexi crazy.  She doesn’t know exactly what’s there, but she knows something is in that bin, it’s small and alive, and she’s not allowed to get near them.

The Buff Orpington is supposed to be docile and a good layer, as are Americaunas.  Kahoots also had a California White (like a dalmation chicken), Rhode Island Reds (some can lay 2 eggs a day!), and white Leghorns.  The guy there said that in times of poor economy, more people tend to buy chickens, so they’ve been ordering them every week.  If they everr get a Silkie, we’ll definitely be there!

Update: pictures (so far) are here

This entry was posted in chickens. Bookmark the permalink.