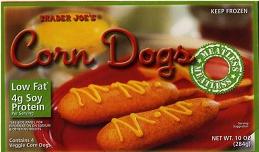 By no means do I consider myself a vegetarian.  I’ll dig into a good ribeye or pork roast without hesitation.  Granted, I have been looking into meatless meals and things out of consideration for our health, but I could never give it up completely.  For one, bacon is only bacon in its pure, fatty, porky form.  For another, most meat substitutes don’t really satisfy a meat craving (which leads me to wonder, if you’re a vegetarian, why are you craving meat?)  But, there are certain things that are so removed from meat form that I think meatless substitutes might work.  Soy chorizo is one.  Apparently, these corn dogs are another.

You have to admit, the biggest reason you’re eating a corn dog is for the corn-bready batter.  But they’re so bad for you, you really can’t justify indulging in them very often.  I haven’t eaten vegetarian hot dogs, so I don’t know what they’re like, but I can tell you that if you dip it in batter and fry it up, you can’t tell the difference.  I’ve heard Morningstar Farms makes a good meatless corn dog; I’ve also heard rumors that the Trader Joe’s version is actually the same as Morningstar Farms.  Whatever.  If you bake them so they’re crispy and swirl it through ketchup and mustard, it makes a decent snack.  Two and a glass of milk could even be considered dinner, if you’re lazy (which I often am if I don’t have to cook dinner for anyone else).

Just make sure the sticks are securely buried in the trash can so curious dogs can’t pull them and nibble on the extra-crunchy batter part that sticks to it.

This entry was posted in food, shopping, trader joe's. Bookmark the permalink.