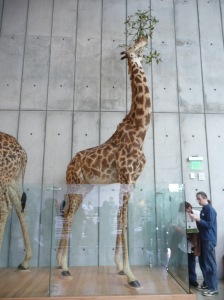 When we were in San Francisco, we went to the Acadamy of Sciences.  They have oodles of animals posed around the museum.  How much would I love to have this giraffe in my living room?  Maybe a baby giraffe would be better… after all, my ceilings aren’t that tall.

Last month I started all my little seedlings and almost all of them have sprouted and grown.  Now I’m just waiting for them to get big enough to plant outside.  I was smart this year and only started one of each of the squash plants and kind of went overboard on the tomatoes.  But it’s okay… I have a feeling there will be some plots of dirt just up the road that would be willing to take the overflow seedlings.  Because we live in spoiled-weather San Diego, it’s probably warm enough outside for planting, but those little plants just aren’t ready.  I’ll have to remember to get them started earlier next year.

So, I’ve been on this new diet.  It’s called eating less and exercising more.  Revolutionary, don’t you think?  Someone should write a book about it.  My iPhone has an app to track weight and calories, and I’ve actually been using it, except on weekends.  I’ve also been getting good use out of the DVDs from Blockbuster, and the elliptical has totally not become a coat rack, although we totally gave up the plan of running that 10k.  Honestly, I’d probably be more inclined to run after work if I had a sidewalk the whole way home.  Stupid house construction.  But, apparently this fancy concept has been working.  Cami and I went jeans shopping over the weekend (this works because we both hate trying on clothes, which makes us very efficient); my jeans have started this annoying habit of falling down by the end of the day.  I thought I would just get a small size and be done with it, but apparently I had to go down two sizes.  I’m sorry if that sounds like gloating, but I’m kind of tickled about that.  Of course, it’s completely feasible that Gap has funny sizing and that I started with too-large jeans to begin with.  But I’m still happy. I also fit into a pair of pants I’d stuffed in the back of my closet because they were too small.  And now they’re not.  Yup, this whole eating less and moving more thing might just have something to it.

On a completely different note, I watched American Idol and was completely underwhelmed.  Maybe it was because they were singing country, but trying to make country not sound like country and it just wasn’t sounding good.  I mean, it wasn’t sounding like good music, even in a non-country way.

This entry was posted in about, exercise, food, tv. Bookmark the permalink.