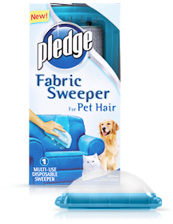 As part of a BzzAgent campaign, I was sent a Pledge Fabric Sweeper to review.  I wasn’t really sure what to expect, and I was actually preparing myself to deal with something that wouldn’t really work too well.  I mean, with three dogs and a cat, all of whom shed like crazy, keeping up with fur on furniture is kind of impossible.

I used to use my Dyson attachments to clean the couch cushions, but then it started feeling very cubmersome and I only did that before a party (when we enter full-on cleaning mode).  Then I bought the Dyson handheld, thinking that surely I could manage to to give up 6 minutes of my time every day to clean the couch (the battery only lasts 6 minutes per charge).  Granted, I do use it to peridically suck up fur and dustbunnies from under the dining table and to clean Clair’s litterbox area, but not so much for everyday couch de-furring.  My friend gave me one of those rubbery, bristley, brush-like, sweeper things, which I do use to “sweep” fur off the couch, but certainly not every day.  We have dozens of the sticky lint rollers around the house, but we only use them for clothes since we’d probably go through one a week if we were also using them on furniture.  I’m a little embarrassed to say that our current solution has been to change into comfy clothes when we get home from work so we don’t care about the fur that transfers onto us.

You can see why I was hesitant about this Fabric Sweeper.  I’ve been through phases where I think I’ll use something every day because it’s so easy and lightweight.  And then I don’t.  Because it’s just easier to sit on the couch and not care.  If you go to the website, you can watch a little video on how the whole things works.  You make short, side-to-side strokes with the Sweeper because it’s not made of rollers; it has half-rollers that only rotate so far.  I don’t know how they do it, but it’s designed so that one roller flicks fur from the other into the top collection area.  Without spitting the fur back out.  Those Pledge people must be geniuses.

Anyway, I must not be a genius because even though one of the main marketing ideas is that it “picks up as much pet hair as 145 sticky sheets”, I kept thinking you could empty the thing and keep using it.  I’m sure everyone else is smarter than I am on this, but just in case, let me make it clear.  This Sweeper is designed to be thrown away when it’s full.  No emptying it and reusing it.  So, apparently, when it’s full it will have collected as much fur as 145 sticky sheets, which is kind of disgusting if you think about it.  Don’t think about it too much.

I tried it out on our couch, because that’s where all the fur is and that’s where we sit all the time.  I have not truly “road-tested” it where I sweep the couch then sit on it wearing black pants.  That would be crazy and I don’t think it would ever work in real life.  But, a lot of fur showed up in the Sweeper after one pass over the couch.  Even on the dog blanket that covers the part of the couch where Sadie sleeps.  However, after closer inspection of the color of fur in the Sweeper, I now suspect Sadie also sleeps a lot on top of the back cushions.

All in all, it took me maybe a couple of minutes to go over the couch.  The Fabric Sweeper is lightweight and I just stuck it in a corner when I was done (but in plain sight so I don’t forget it’s there) and I think it’s convenient enough to use before even casual company stops by.  I hear it retails for about $5-6 at stores, which kind of seems high for something designed to be thrown away.  But, depending on how long it lasts (or doesn’t fill up), if you only have to buy one a couple times a year, that’s not so bad.  In the end, if you were wondering if this product actually works as advertised and would make your life easier, then I have to admit that it does all that.  And even though it makes no noise whatsoever, it still totally freaked out the dogs.

This entry was posted in dogs, product review, shopping. Bookmark the permalink.