Thank you everyone for your happy birthday wishes.  I had a pretty rockin’ birthday dinner at The Linkery with our friends.  It’s good to have a solid core group of friends… everyone should be so lucky.  As always, we ate very well, enjoying sausages and beer and beverages and cake.  And lamb.  I try to check in with the Linkery blog before we eat there to see what’s new.  The menu is always changing, but if you can get down there while they still have lamb I would recommend doing so.  I had the lamb sopes, which were so good, and now I want to try the grilled leg of lamb.  T mentioned it was too bad they ran out of abalone before we got to try it.

After dinner, we came home to a very toasty bed.  Every winter, I take my old electric blanket (which totally does not fit on the queen-sized bed) and plug it in so I don’t freeze while trying to fall asleep.  T is always warm, so it didn’t seem like a problem that the blanket only warmed half the bed (because it only covers half the bed, not because half the wires don’t work).  My half, of course.  It also seemed to do a good job, so why replace it?  Well, because T knows me better than I know myself, he decided a new blanket would be worthwhile.  And, because he is often right, this new blanket puts out more heat, covers the bed so that the whole bed is warm and the edges aren’t cold, and it somehow makes the bed even more snuggly.  We already sleep on top of a feather bed and under a down comforter, so for me to say the bed got more snuggly you know it must be good.

On Saturday, my wonderful friends came out again to go to brunch at the Marine Room in La Jolla.  This is a fancy-schmancy restaurant that is expensive and right on the beach.  In the winter, they hold a few High Tide brunches where you can watch the waves come up to the windows.  Because they only have brunch during the winter high tide season, the brunches fill up pretty quickly.  We were seated at 10:30am, kind of the low end of high tide, but it was still pretty cool seeing the beach right out the window.  The food was very good, too.  I only got one picture of food because, as I’ve mentioned before, once we start eating I get too excited to remember to take more pictures. 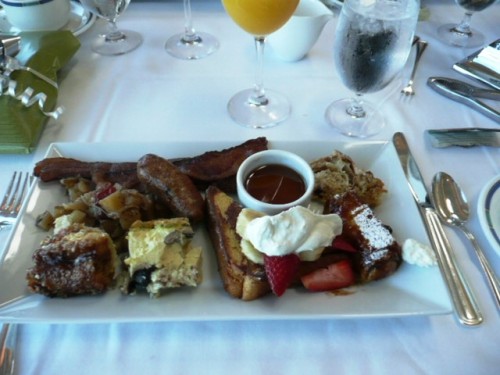 I started with oysters, shrimp, and stone crab claws (the crab claws were the best).  Then I went to the hot foods area to get: bacon, apple sausage, potatoes with carmelized onions, Grand Marnier french toast, bread pudding, cheese blintz, black forest ham quiche, and a mushroom frittata (or maybe it was quiche and the ham one was a frittata?).  It was all good.  The french toast wasn’t very Grand Marnier-y and the bread pudding was just okay.  The egg dishes were so good.  Tasty, light, not overwhelmingly eggy, and each had crispy parts along the edges.  Yum.  My favorite was the cheese blintz.  The filling had some cream cheese in it instead of all ricotta, which made it moist and tasty.  I think it was the best cheese blintz I’ve ever eaten.  There was another station with cheese (the brie was awesome), three kinds of smoke salmon, pate, bread, couscous, and fruit.  And an omelet station.  And desserts.  So much food.

Considering the view and the quality of food, I think the Marine Room brunch is worth the $32.  We all left quite full, and we were full of good food, so I have no complaints.  There’s no carving station, but that would probably bump the price up by $20, so I’m fine that it’s not there.  It’s not a brunch we would go to every year, but it was fun to experience it, especially with all my friends for my birthday.

Then!  As if that wasn’t enough excitement, we gathered later that night to play Rock Band.  Even though my singing score progressively went down as the night went on, it’s a totally fun game, especially if you get to play the drums.

Sunday we held a little bbq at home to watch the Chargers play.  They didn’t win, but we were still rooting for them a little.  Anyway, we still had a lot of good bbq food, so all was not lost.  T even finished smoking more albacore later and it turned out very nice.  cured, smoked, but still moist.

What an exhausting birthday weekend!  Now we have to finish the food in the fridge and get packed to go up to Mammoth for a few days.  I hope they get some nice fluffy snow to help cushion all my falls!

This entry was posted in about, food, nifty, restaurants. Bookmark the permalink.

One response to “Birthdays rock!”