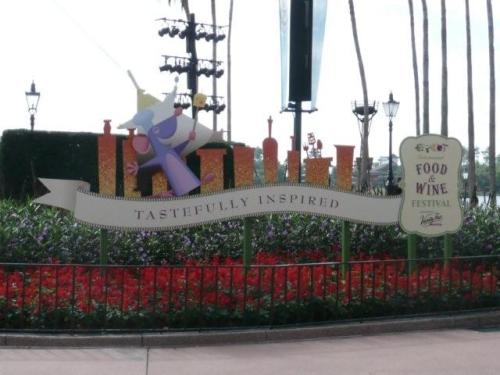 The timing of our conference was fortuitous in that we were able to visit Epcot during their Food and Wine Festival. While Epcot normally has about a dozen countries represented in its park, the Festival pretty much doubles that with little stands, booths, and displays. It’s actually pretty nice because you can go around and buy little bites of food all day long, instead of purchasing a meal from one of the permanent restaurants.

We got to the park just before it opened, counted down to the opening (5-4-3-2-1!!), rushed forward… and then got stopped for another 5 minutes before they really let us in. I still don’t know why. Our plan was to go and get a Fast Pass to some ride, wander around, ride some rides, and then meander through the countries. However, when we got to the rides, they had no wait, so we just walked right in and did the rides before eating. It was just as well, as the Festival didn’t open for another hour or two.

Of the Epcot rides, Mission: Space, Test Track, and Living with the Land were probably the most memorable. We got to ride Test Track twice in a row because the first time we got stopped while going around a banked curve. It’s a pretty cool ride and the acceleration at the end is impressive. Mission: Space is something I probably only need to do once, considering it left me slightly queasy. However, the experience is so different and astounding, that you really do need to see what it’s about. You really feel like you’re being launched into space and are floating to Mars. Weird.

Living with the Land started out kind of cheesy and I was getting bored with watching the evolution of the man/environment relationship. Then we went into the greenhouse and things got very cool. There are dozens of plants grown in a few different medias ranging from nutrient film technology to something that resembled a plant food car wash system. A lot of what we consider ground plants (tomatoes, watermelon, pumpkin, eggplant) have been strung across support systems so they resemble “trees” more than vines or stalks. There was even a mouse-shaped pumpkin and a nine-pound lemon!

Then we went through the fishery to see some catfish, alligator, shrimp, and other fish. Many restaurants in Epcot serve this very food, but we didn’t dine at any. It’s just such an interesting exhibit and fascinating to see it on such a (relatively) large scale.

So, with the rides “out of the way”, we wandered across the bridge to start our walk “around the world”. Some of my favorite bites:

We didn’t try food from Mexico, Japan (sushi rolls), or Italy (come on, pizza?), but we managed to get a taste from just about everyone else. We also didn’t do any wine tastings along with the foods because it was warm and muggy and we just didn’t want to end up tired and boozy. After reading through the festival guide, we loaded a Disney gift card with money and it was much easier than paying cash or swiping a credit card all day long. T is now inspired to to identify restaurants here in San Diego that represent different countries, which I am all in favor of.

Oh, and if you are lucky enough to remember Coca-Cola World in Las Vegas, with the multiple fountains of Coca-Cola products from around the world, there was a little station at Epcot that had samplings of these soda (only a handful, though) and it made a nice break from the warm weather.

Aside from attractions we have at either Disneyland or California Adventure, I think T and I saw everything to see within Epcot. We did not catch the Circle of Life show, mainly because the tag line said it was “An Environmental Fable” and after watching Happy Feet, I’m kind of over the cartoons-trying-to-be-environmental-messages. If we’d had more time, we would have spent it wandering through the shops more and maybe sitting down with a beer.

This entry was posted in food, places. Bookmark the permalink.