Ya gotta see this 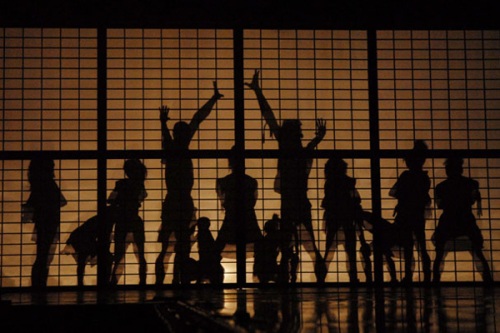 Over the weekend, T jetted off to Phoenix to spend some time with the guys and I headed to Las Vegas to visit my parents. When I go to Vegas, it’s a weekend filled with eating, more eating, sometimes shopping, and maybe a show. I like going to Whole Foods and DSW Shoe Warehouse because, while we have the same stores in San Diego, the parking lots in Vegas are much less crowded and easier to navigate. We go for dim sum in Chinatown, just about anywhere for dinner (this time it was Bonefish Grill… yum), and usually Bally’s Sterling Brunch on Sunday (this time we went to the Steakhouse at Circus Circus – good food, nice brunch, but it’s no Bally’s). The show we went to see is one I enjoyed almost more than seeing Cirque du Soleil.

My mom took my dad to see a show at Sahara for his birthday. All she knew was that it was a high-energy Japanese show and that there wasn’t much publicity for it. And that tickets were not cheap. However, she enjoyed it so much, she bought tickets so that we could see it when I was visiting.

Matsuri is hard to describe. You have about two dozen twenty-something wacky Japanese kids (mohawks, green hair, pink hair, hyper-energy) whose backgrounds include models, dancers, gymnasts, yo-yo performer, plate spinning, stunt bike, hula hoop wrangler, and other such acts. Combine that with some of the funny and crazy Japanese tv show acts you see here and there (maybe on YouTube) and a lot of dancing and jumping around. For an hour and a half. They’re all fit, they’re all cute, they’re all in sync and then they break into the different acts that are either comedic, acrobatic, visually stunning, or just fun to watch. It’s like Stomp, but more fun. It’s like Cirque du Soleil, but sillier and less artsy, without the symbolic red balloon that floats around with no explanation. My favorite act involved the Japanese “drums” because it was such a creative way to perform and it sounded just as impressive as if they actually had a full drum ensemble.

The small Sahara theater wasn’t full on Saturday night and it looked like a lot of the guests were Japanese tourists (I hear the Las Vegas tickets are much cheaper than seeing the show in Japan) but the show still got a standing ovation at the end. They put so much energy into their performance and they look like they’re having so much fun that you can’t help but have a good time. Sadly, there are no programs or posters to buy, just two wall hangings at the entrance that gives a short bio on each of the performers. I’m hoping that Matsuri is successful enough to move up to a bigger theater that will provide some sort of program (or even a flyer!) to purchase and take home.

If you are going to be in Las Vegas, I highly recommend catching this show. It’s different but wonderful to watch.

This entry was posted in nifty, places. Bookmark the permalink.