It was on the Food Network, so you know the rivalry is real. Pat’s is on one corner, Geno’s is on the other – funny corners, actually, since the streets intersect in an X rather than a +. People have loyally chosen one over the other, claiming their place makes the best cheesesteak. The rivalry between them is actually over who came first and whose is the “original cheesesteak”. Maybe they’ve settled it by letting Geno’s claim to be the original while Pat’s claims to be the “King of Steaks”? Either way, we were curious as to whether these steaks could live up to the hype or if they were just victims to tourist propaganda.

We found parking right next to Pat’s (Pat’s will be on the left, Geno’s on the right in this post). Should we order separately – T at Pat’s and me at Geno’s? The logistics of this un-official taste-off was important. When the competition is across the street and easily visible, there’s not much you can hide. Since I had no cash and was also paranoid I’d get yelled at by ordering the wrong way (oh yes, there’s a right way and a wrong way to order), we just went in as a team. T ordered (wiz cheesesteak, wit = cheesesteak with Chees Wiz, as opposed to American or Provolone, “wit” onions), I applied ketchup. Pat’s was taken care of and we walked around the back of the building to stash our food (brazenly covered in Pat’s advertising all over the package) in the car before hopping to the other side of the street, trying to casually cross to Geno’s. I envisioned angry Pat’s customers tackling us or throwing Cheez Wiz, but no one seemed to notice.

Prices were the same at Geno’s – that’s just good business. In order to facilitate payment, tax is “included” in the prices so everything ends up being an even dollar amount or in 50 cent increments. Again, T ordered and I was sent to the separate window for drinks (you can’t have non-cheesesteak orders messing up the process). Because we didn’t get drinks from Pat’s, I don’t know if they have the same arrangement, but Geno’s offers you Pepsi and Coca-Cola. Perhaps the urge to keep customers is so great they don’t want to risk losing a Pepsi drinker to someone else? I actually prefer Coca-Cola and didn’t know what T wanted, so I got a Coke and a birch beer (it’s like root beer but orange-red in color). T applied ketchup, wrapped it all up, and we hopped back in the car like nothing was amiss.

Somehow, the plan was to eat these on the way to the airport, but it’s pretty messy to eat one of these in the car, much less conduct a proper comparison. We found a park and a space, so that became the site of the cheesesteak competition. Would one come out ahead of the other? Would they be worth the effort? Would they make our heads explode with cheesesteakiness?? 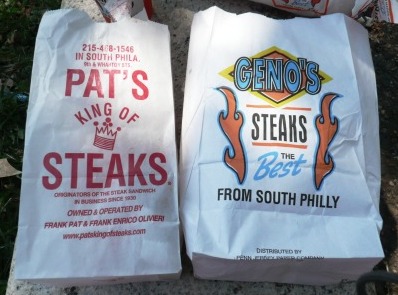 See the packaging? See how Pat’s is all “we’re old school and our design hasn’t changed since we opened” and Geno’s is more “woohoo, baby! We’re updated and upgraded with the flames and colors and we totally rock”? And then the cheesesteaks in their full glory? Also, notice that the ketchup job on the Pat’s sandwich is way better than whoever put it on Geno’s? Also, do you see that Geno’s looks to be about 25% smaller than Pat’s? I didn’t notice this until I saw the picture, but I’m pretty sure that’s a whole Geno’s cheesesteak and not half.

Again, Pat’s on the left, Geno’s on the right. Observe that Pat’s appears to have more meat in the sandwich and also more gooey Cheez Wiz (we usually get American or Provolone, but everyone talks about Cheez Wiz being the ultimate cheesesteak topper so we went with it). So, now we know that Geno’s puts in less meat and allegedly uses shorter rolls. Are you wondering how they tasted yet? Because looking at the pictures is actually making me kind of hungry again. I’ll try and break it down into categories.

Bread. Both cheesesteaks had good bread – soft with a slight chew. Neither rolls got soggy, although there wasn’t much in the sandwich to make a soggy mess.

Meat. Pat’s had more meat, but it was on the drier, tougher side. It wasn’t chewy, just not tender. Geno’s had less meat, but it was softer and nicer to eat. I had a hard time decided if I prefered more meat of lesser quality or a skimpy amount of good meat.

Cheese/Cheez. Pat’s had a good amount of Wiz, which added a moisture component to the sandwich. It also helped that there was a lot of ketchup, which adds that ketchupy tang to the flavor. Wiz wasn’t all that different that having melted American cheese, and I can see how people enjoy it in a cheesesteak. Geno’s had less cheese (and less ketchup, ahem) but since the meat wasn’t dry, it all turned out okay. Also helping Geno’s cause…

Onions. The onions in Pat’s were onion-y. You know, chopped and soft, but just standard onion. Geno’s onions were sweeter and I liked that in this cheesesteak.

The winner? It really was a toss up. While we tried to compare apples to apples by ordering the same thing at both places, you have to wonder if Geno’s would have been a clear winner if the cheez/meat/ketchup quantities were the same as in Pat’s. That being said, I think we do prefer the better meat, so we edged Geno’s slightly ahead of Pat’s to be pronounced “Best”. Having said that, I would take a Philly Frank’s cheesesteak over either of these two in a hearbeat. The rolls are good, you get more meat (actually, I think you get more meat anywhere but Pat’s or Geno’s), you get sweet peppers, and it’s good. Granted, you don’t get your sandwich 5 seconds after you order, but you also don’t have a line of people behind you ready to complain if you take too long.

So, there you have it. We held a showdown, survived the rivalry, and finally tasted the famous institutions of the cheesesteak world. You may hear rumors that near the end of our meal, the two ends of each cheesesteak were opened up and then placed on top of each other, melding both worlds into one, but I’m certainly not going to validate that. I mean, who would do such a thing? That’s just crazy.

This entry was posted in food, places, restaurants. Bookmark the permalink.