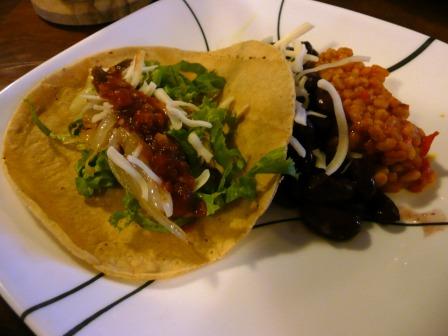 This is what happens on Monday nights, when it’s really hot outside (and inside), you don’t really want to cook, you don’t want to go out, you definitely don’t want to get on the elliptical, you know there is CSA produce that needs to be eaten and you still want a somewhat good meal.

I had made coconut brown rice one night when we had tuna for dinner.  I thought tuna and coconut would go well together, I just forgot that it doesn’t work as well with brown rice as it does with Japanese rice.  I ended up with slightly coconut-fragranced hard brown rice.  Mmm… boy, does that taste healthy!  I decided to revive it (and hopefully pump moisture into it) by making tomato rice.  Like Spanish rice but without the kick or spices.  I took the cup of leftover rice and tossed it into a pot with 3 small diced tomatoes (skin and all), salt, and some garlic powder.  I wanted the garlic taste but without the kick that you get with fresh garlic.  Does that make sense?

Of course, we had no black beans in the pantry.  Garbanzo beans up the wall, but no black beans.  We did have kidney beans and T declared that was just as good (or at least a better option than chickpeas), so we ate kidney beans and tomato rice.  I just could serve rice without beans.  It isn’t done.  Unless you’re Japanese, of which half of me complies.  So I guess it’s fair to say that half the time, I do serve rice without beans!  I’m sorry… it’s late and I’m not making sense.  Because the other half of me isn’t Hispanic, which is good because tomato rice and kidney beans would be so laughed at.

Last week, before we headed to Idyllwild, I tested out another recipe that actually came out much better than I thought.  In hindsight, it really wasn’t much of a recipe except for the rub.  It’s a paprika based rub that you spread under the skin of a roasting chicken and then all over the outside.  Roasted at 425 for 1 1/2 hours with some potatoes crisping in the goodness under the chicken and you have a nice meal.  Once you add a salad.  Made with CSA lettuce and tomatoes, of course.  So, we had some chicken meat leftover.  What do you do with leftover chicken meat?

You make tacos! (see above photo)  Now do you see the connection (as faint as it is) with the beans and rice?  I also made some salsa with the CSA salad tomatoes and an Anaheim pepper from my garden, but we ate it with chips before dinner so we had to top the tacos with jarred salsa.  All in all it wasn’t too bad.  Not the best meal I’ve made, but it didn’t require too much cooking and it also included minimal fat.  We didn’t eat a salad like I had planned, but some lettuce did get put into the tacos.  At least, into my tacos.

I wish I had taken pictures of the roasted chicken when it came out of the oven.  Or the fried green beans I made along with this green mayo (that I made from scratch for the first time ever!): 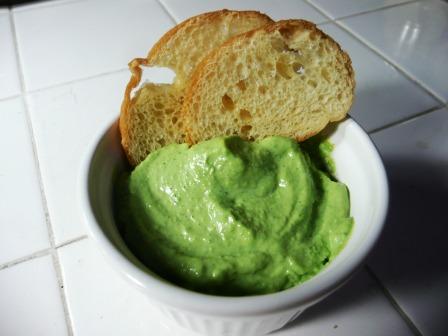 I mean, those would have been impressive dishes to write about!  All I have here so far are my mediocre, in-a-rush weekday dinners.  I’m just going to have to work on this better.  Post notes to remind myself to take pictures of food, stuff like that.

This entry was posted in CSA, food. Bookmark the permalink.