It’s not always gourmet around here 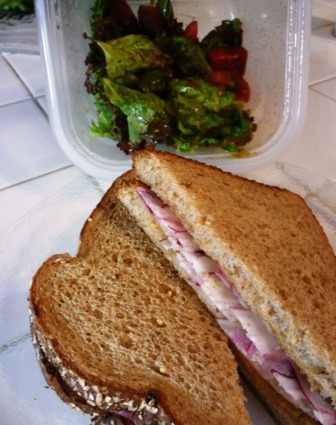 That was my dinner Tuesday night. A salad made of my CSA tomatoes and lettuce and a radish sandwich made with CSA radishes, Double Devon Cream butter, and sea salt. When it was just me and I didn’t have anyone else to cook for, a lot of my dinners looked like this. Well, actually, they didn’t even look as good as this. I didn’t eat salad and I wouldn’t have bought radishes. It would have been a grilled cheese sandwich and maybe a peach if I had bought some earlier. Sometimes cinnamon toast and edamame. Sometimes, rarely, an ice cream sundae. I mean, I cooked for myself and occasionally put together a good balanced meal. I really did eat healthy, in between all the trips to the gym I had time for. But it’s just not as much fun planning a meal when no one else is there to be wowed by it.

Tuesday night T worked late and came home just as I was finishing my sandwich and the most recent Big Love (love my DVR!). He’s a good guy to cook for and I don’t think he’s ever complained about a meal I’ve made for him. Of course, how could I possibly ever make something not wonderfully tasty? So, for him I make stews and braised short ribs, chicken in cream sauces, salmon baked in parchment paper, roast chicken, pork chops and roasted vegetables, pasta dishes, steamed mussels in white white, chicken milanese, garlic shrimp, risotto, and pulled pork. He’s also been a good sport through all the recipes I test out on him.  I put effort into the dishes, throw in a little extra butter and garlic, and don’t mind the hot kitchen in the middle of the summer. For me? Simple, fast, easy, but still tasty. Fancy alone food would be orzo salad.

Still, my simple Tuesday dinner was pretty good. If I had cut the crusts off the sandwich it would have been like little tea sandwiches. If I had topped the salad with a poached egg, it would have been something worthy of California Cuisine. Had I finished the bottle of white Merlot, it would have been nice meal at home for one. But I didn’t do any of those things… I just ate my little dinner in front of the tv and then was very happy when T came home.

If you haven’t had a radish sandwich, on bread buttered with the best butter and sprinkled with crunchy sea salt, I highly recommend you try it. I sliced the radishes with a vegetable peeler because I didn’t want to get the mandoline out for such a small job, but I wanted thinner slices than a knife would accomplish. The thin slices help cut down on the bite from the radishes so you just get crunchy and slightly sweet with a hint of radish heat. Yum.

This entry was posted in CSA, food. Bookmark the permalink.