If you read food blogs, you’ve heard of David Lebovitz’s book, The Perfect Scoop.  I bought a refurbished Cuisanart ICE-20 a couple of years ago but couldn’t find a good enough ice cream recipe to warrant making ice cream instead of buying Ben & Jerry’s.  I read enough postings on other blogs and decided to just purchase The Perfect Scoop.  I started out with the basic vanilla ice cream, no-egg version.  I figured if that was good, the other recipes using the vanilla as a base would be pretty good, too.

That vanilla ice cream started us down a path that is just wrong.  I haven’t even gotten to the “fancy” flavors and I’m already loving the book.  If David Lebovitz were to appear before me, I’d probably turn into a babbling idiot and tell him I love him and I love his ice cream and I’m sorry I thought that perhaps his book success was just due to the mass food blog adoration, like foodies not wanting to tell the executive chef his apron was missing. 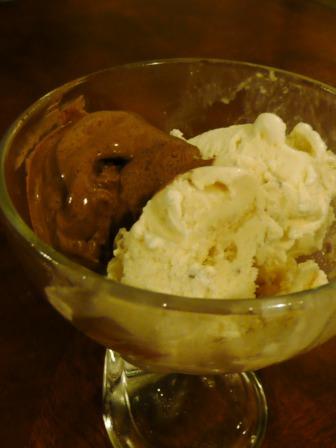 That is a bad picture of good ice cream.  Excellent ice cream.  Ice cream that makes me not want to share.  You really can’t see it, but clockwise from the chocolate is cinnamon and then malted milk at the bottom.  It’s warm, the ice cream is melting, someone took a bit out of it before I could take a picture, and I’m having trouble with the camera lighting.  So I’m just going to have to describe it to you without drooling on the keyboard.

The vanilla I started out with was like the sweet cream ice cream at Coldstone’s, but better.  2 cups cream to 1 cup milk made this heavenly ratio where your tongue didn’t get coated with a funny milkfat film.  3/4 cups of sugar sweetened the batch and 1 vanilla bean gave you flecks of vanilla and a hint of flavor to tell you you weren’t just eating frozen cream.  Sweet, light, creamy (not rock hard!), delicate – one of those things you sneak a spoonful of at all times of the day.

Then I made frozen yogurt (full fat Trader Joe’s Greek Yogurt), since it was all the rage on the internet (so many posts I can’t even link to them all – start with Heidi’s), Pinkberry’s is brainwashing people, and Yogurt World has captivated San Diego.

Next I made the mint ice cream, planning to turn it into mint chip (David, you are a genius telling us about Straticella for “chips”) and I followed his recipe to the letter.  And was so disappointed.  His mint ice cream calls for a custard base, but I found the resulting ice cream too eggy in flavor.  Great texture and scoopability, but the mintiness faded away against the custard.  This ice cream sat in the freezer the longest.

We love sprinkling malted milk powder on ice cream – a little maltiness, a little crunch, just heaven for dessert.  Naturally, the malted milk ice cream (with crushed Whoppers) piqued my interest and I forged ahead with the second custard-based ice cream.  Let me just say that when I tasted the mix to make sure it was cold enough, I almost ate it all right there it was Just That Good.  Here we had success!  Rich ice cream, malted milk flavor throughout every bite, small crunches from the Whoppers, chewy texture but silky smooth.  This was my new favorite.  Best Ice Cream Ever.

I also made it without eggs, just to see if it was worth the “trouble” of cooking a custard base.  The resulting ice cream took less time and was just as flavorful, but with a slightly cleaner taste (that’s the version in the picture at the top).  It still never froze rock hard, staying nice and scoopable but not as chewy as the custard-based version.  I’m happy with either, T prefers the no-egg version, but if I wanted that rich, chewy ice cream, I’d definitely go with the custard base.  The malted milk flavor is strong enough to stand up to it.

Coffee ice cream came next, no eggs even though the recipe called for it.  Coffee beans steeped in cream/milk.  Easy!  Like eating the perfect cup of coffee (cream and sugar, please) in ice cream form.  And so caffeinated that I can’t eat it at night or I can’t sleep.  I guess it’s coffee ice cream for breakfast until it’s gone!

Because I had too many carrots, I had to make carrot cake.  Because we were out of vanilla ice cream, I had to make something else to go with the cake.  Cinnamon ice cream sounded good (I like it with apple pie) and simple (again, I cut out the eggs) and that is how I ended up finding my new favorite ice cream (sorry malted milk).  It has the simple creaminess of the vanilla, with the hint of a cinnamon stick that gets stronger as it dissolves on your tongue.  This isn’t the bite of Red Hots, it’s like sniffing a cinnamon stick while eating ice cream.

Chocolate ice cream sounded good, too, so I tried the recipe that didn’t call for eggs.  David says that unsweetened chocolate has a tendency not to melt down completely so you should use a blender to mix it well at the end.  I didn’t listen, thinking my whisk would take care of it all, and I should have listened.  But the ice cream turned out well, anyway.  Like hot chocolate ice cream, rich with the cocoa powder.  I think I’d like it a tad bit sweeter, but I’m sure I won’t have any problem finishing off this carton.  I’m also pretty sure making the custard-based chocolate ice cream will be a huge success.

The white cardboard pint containers from Smart & Final are perfect for storing ice cream.  I think the thin plastic of Gladware and such makes the ice cream too icy after a while.  I’ve also started making half recipes of ice cream, which fits perfectly in one pint container providing you have someone willing to lick excess ice cream off the paddle.

I had also considered upgrading to the Cuisanart ICE-50BC, the refrigerated model, so we could make ice cream after ice cream without having to wait for the canister to refreeze.  But after making a few pints, I realized that we don’t eat ice cream that often and we can certainly afford to wait a day to make a new flavor.  That saves me $300!  And some freezer space.

The Perfect Scoop is now my first reference when I’m looking up an ice cream flavor.  I don’t think I’ll ever buy another ice cream book beyond this and when looking at other recipes I’ll certainly compare the ingredients to a similar one in the book.  You don’t mess with perfection.  Now, go make some ice cream!

One response to “It’s a good day for ice cream”