Classico sauce is not the devil

Does that look appetizing? I don’t know, it doesn’t look like the best picture, but I’ve never claimed to be a good food stylist. It’s our Sunday dinner. When we watched Sopranos, Sunday dinner was Italian night. I did pretty well at creating meals that weren’t always pasta and more pasta. Apparently, tonight was Italian night even though Sopranos is long gone and we haven’t found a new Sunday night show to replace it.

One thing you don’t see often on food blogs (which isn’t really what I claim to be, it’s just that we like food and I’ll probably talk about it a lot) is the admission of what prepared foods they use (if any). I went through a phase where I scorned anything that came in a box or a jar because if I couldn’t make it myself, I probably didn’t deserve to eat it. Thankfully, I’ve grown out of that phase and while I still forgo prepared foods in favor of making it myself, there are times when shortcuts are not only helpful, but tastier than what I could make from scratch. Add in the fact that T brought a lot of prepared foods when he moved in and you have an extremely varied pantry.

We have a freezer full of salmon, chicken, flap steak, and various other things that should be eaten. Tonight I pulled out 2 chicken breasts (yay Costco and the individually shrink-wrapped chicken breasts!) to be covered in Classico sun dried tomato pesto sauce. I rarely use jarred sauces since pasta sauce is pretty easy to make, although I do make those with canned tomatoes. But this was in the pantry, needed to be used, and it sounded okay. When I opened the jar, it smelled better than okay. I swear it smelled like it had ground beef or sausage in it, it was that hearty.

I also cooked up some CSA carrots, steaming them in some water then finishing them off in a tablespoon of butter, letting the carrot sugars carmelize and also getting slightly crispy in the butter. They were pretty good, if I do say so myself.

There was also a bit of reduced fat Trader Joe’s goat cheese (is there anyone who doesn’t love Trader Joe’s?) left in the fridge, so I cut a pocket into the chicken breasts, stuffed it with goat cheese, spread some Classico sauce on top, and then baked it in a foil packet at 350°F for 30 minutes. While it was baking, I boiled up some Trader Joe’s mini cheese ravioli (it was in the pantry, I don’t know why) and then topped it with a dab of butter and grated Parmesan.

That’s how most of my dinner recipes go: meat + seasoning, vegetable, possibly pasta. No real measuring, just seeing what’s in the kitchen and the fridge that can be used and will go together somewhat logically.

Incidentally, this is the view we had as we ate dinner tonight and what we get to look at most nights. 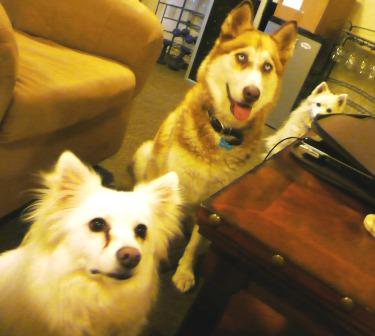 2 responses to “Classico sauce is not the devil”