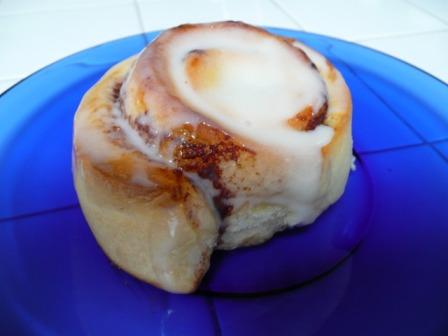 Doesn’t that looks good?  Okay, maybe it could look better.  I’ll get better at the picture taking, I promise.

Sometimes you just want a warm gooey cinnamon roll for a weekend breakfast treat.  Since we bought an elliptical machine and have been using it religiously (some of us more than others), I figured I could splurge on a cinnamon roll.  But who has the time to make a good yeast dough, let it rise, form the rolls, and let it rise some more??  So, here’s my secret recipe for easy quick cinnamon rolls.  Granted, it does take some advance prep work, but in the morning it’s really just the 20 minutes of baking.

Step 1: At least a day before planning to eat cinnamon rolls (and maybe even up to a week before), when someone is making a quick grocery run, call and say in your sweetest voice that cinnamon rolls sure would be a nice treat for the weekend.  It is important to have good communication so that your request is not misinterpreted.

Step 2: The morning of said breakfast treat, preheat your oven to 375°F  and grease a baking pan (round, square, whatever).

Step 3: Carefully open the Pillsbury Grands Cinnamon Rolls (now made with Cinnabon cinnamon!), because sometimes they make a large popping noise, and separate the 5 rolls of dough.  Evenly space the rolls within the pan.

Step 4: Bake for 18 to 20 minutes while multi-tasking and also brewing coffee.

Step 5: Remove the rolls from the oven and distribute the cream cheese icing among the rolls.  Don’t forget to lick the icing spatula.

I know, it’s totally cheating, but sometimes a craving has to be filled quickly and sometimes a craving really wants prepared cinnamon rolls.  Don’t judge.  Besides, I feel I’ve redeemed myself because I’ve spent 2 days preparing and making butter croissants from scratch (from scratch!) and they were really really good.  Talk about a decadent treat.  So, I don’t feel guilty taking shortcuts this morning.

One response to “20 minute Cinnamon Rolls”