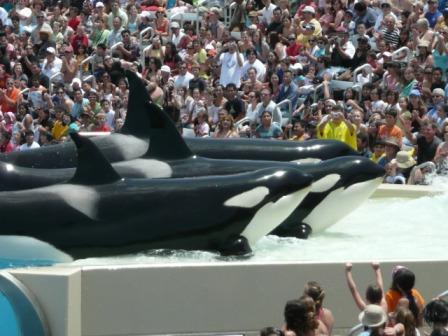 Over the weekend, T’s friend and his family came into S. Ca for their vacation and spent a day in San Diego. We went to Sea World with them so we could see them while they were here. Wow – did you know it costs $57 to go to Sea World? Using our AAA membership, we were able to knock $10 off each ticket, but still… I do have to say that we spent an entire day there and saw most of the park, so I think our admission was well spent.

One of my favorite exhibits is the (recently renovated) penguin exhibit. It’s really cold and it sort of smells like fish, but penguins are so cute, waddling around on their fake ice and flying out of the water to land on top. About a month ago, we had taken a behind the scenes tour with our “nerdy engineering group” and learned that the penguins sometimes have trouble with the slippery fake ice ledges, so the staff is trying to figure out how to rough the surface up without damaging the material too much.

The kids we were with were so incredibly behaved – I guess 2 are teenagers and don’t really qualify as kids – and so fun to be around. I wish they had stayed in San Diego a little longer.

This entry was posted in places. Bookmark the permalink.